Flooding risk is often used as an argument against greater environmental flows for the Murray-Darling, but graziers would benefit greatly from floods, writes Richard Kingsford. 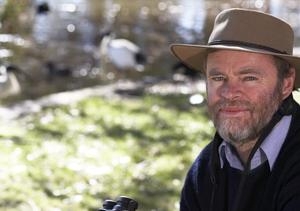 OPINION: The history of our development of the Murray-Darling Basin is one of constraining and constricting its rivers’ flows. Many of the basin’s floods are now captured in dams for later constrained release to towns downstream and for irrigation of agricultural crops. In planning the future of the Murray-Darling Basin, fear of letting these floods free again has determined how much water will be released back to the environment. More water – say opponents of higher releases – will mean more flooded towns and farms. But new research we have just completed shows this flooding could actually help agriculture in the basin.

Constraining the river has come at significant environmental cost. The health of rivers and wetlands has declined, salinisation and blue-green algal blooms have spread, and social and economic costs increased. There was significant damage to the Lower Lakes and the Coorong in the last big drought, exacerbated by upstream development of the river.

That’s why a basin plan with more water for the rivers is so important.

Before the rivers were constrained, they would go through classic “boom” and “bust” periods with large floods punctuated by long dry periods. The floods would naturally spread out across the floodplain, running down the streams that make up the network across the floodplain and supplying the myriad dependent organisms.

Understanding the natural behaviour of rivers is the key to comprehending the current debate about the proposed plan: it is not just a channel but had once-vast floodplains dependent on flooding.

The controversial Murray-Darling Basin Plan will likely be tabled before Parliament rises on November 29. When the Murray-Darling Basin Authority presented the current proposed plan it said only 2,750GL of water could be delivered back to the basin, arguing that constraints stopped larger amounts of water being delivered. These constraints take many forms, all predominantly designed to control the river and its flow. They are administrative, policy-based, legislative and physical.

The physical constraints are mostly dam outlets not big enough to release large environmental flows, and the inundation of bridges, towns and land.

But removing many of the constraints will require changes in policy, potentially legislation, and cooperation from recalcitrant eastern states. Battle lines have been drawn on the potentially detrimental impact of environmental flows on bridges, towns and agricultural land, exacerbated if a higher volume of 3,200GL was returned. According to the NSW Primary Industries Minister, this would flood private property, cause river bank erosion and submerge bridges and weirs.

The full impact of environmental flows on infrastructure is not well established. Worse, little to no attention is given to the benefits of flooding. In a new report funded by the Australian Floodplain Association, we at the Australian Wetlands, Rivers and Landscapes Centre investigated the likely maximum impact of environmental flows on land use across the entire basin.

Our analysis showed the majority of the flooding occurred on grazing land: the overwhelmingly largest area of flooding was on about 84% of grazed land in the basin. This type of land benefits enormously from flooding. It recharges groundwater and helps grow the grass on which sheep and cattle feed. Flooded land often commands a premium over non-flooded land.

Graziers have been particularly affected by the regulation of rivers and diversion of water upstream for irrigation. A grazier on the Condamine-Balonne succinctly describes this as the “transfer of wealth upstream”. Fewer floods have significantly decreased grazing incomes on most of the regulated rivers of the Murray-Darling Basin.

So the environmental flows that will be provided through the Murray-Darling Basin Plan should not be considered just flows for the environment. We identified that areas flooded in national parks and reserves amounted to only a little more than 5% of the wetlands. And our analysis probably represented a maximum impact, as we used the largest flood in a 10-year window, significantly higher than even 3,200 GL would deliver.

However, there will be bridges and properties flooded, and this will need to be addressed. Australia is always repairing roads and bridges, and any vulnerable bridges could easily be flood-proofed. And water authorities could purchase easements of flooded land, compensating affected landholders and allowing environmental flows to naturally flood. Similarly flood defences are well established in Australia around towns. Every flood prone town has levee banks to protect it even from the largest flood. In a recent flood, Charleville on the Warrego River in the northern Murray-Darling Basin escaped major damage because of the well-constructed levee bank around the town.

The proposed basin plan and its environmental flows represent one of the most significant environmental initiatives in Australia’s history. This is a chance to redress the problems of the past and restore this mighty river for all Australians. It is important not to limit this vision with relatively small constraints that can be removed. It is time to let the river run more freely and do what it does best naturally – invigorate the river environment and provide ecosystem services – predominantly agriculture – for the people of the river.