To celebrate the centenary of Sir Douglas Mawson’s expedition to Antarctica, UNSW scientists are leading a modern-day voyage to retrace the route taken by the great Australian scientist and explorer. 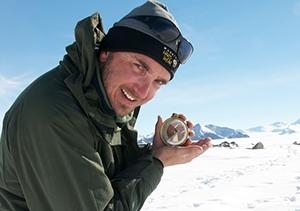 To celebrate the centenary of Sir Douglas Mawson’s 1911-1914 expedition to Antarctica, two University of New South Wales scientists are leading a modern-day voyage to retrace the route taken by the great Australian scientist and explorer.

A team of 46 researchers and members of the public will set out from Hobart in November for a six-week journey to the white continent.

Led by Professor Chris Turney and Dr Chris Fogwill, of the UNSW Climate Change Research Centre, the expedition will repeat measurements made by Mawson’s team, including observations of the ocean, wildlife, weather, geology and ice cover.

“Antarctica remains one of the last, great unexplored regions on Earth. It is a unique place to monitor the health of our planet. We want to discover just how much has changed since Mawson’s time,” Professor Turney said.

Details of the $1.5 million expedition were presented at a BrainFood Lecture by Professor Turney at UNSW on Monday evening.

Another aim of the privately funded voyage is to recapture the excitement of scientific exploration and discovery, just as Mawson was able to captivate the public’s imagination with his trip.

Mawson was the first Antarctic explorer to use wireless radio to communicate with people back home. The new Australasian Antarctic Expedition, likened to “the Spirit of Mawson”, will communicate with school children and the wider public during the trip using the latest technologies, including Google Hangouts on Air, Twitter, blogs and YouTube.

Google has just launched a ‘Doodle 4 Google’ competition for school students to create a Google doodle depicting their vision for “If I was an explorer I would…”. Two teachers, one each from the national winner's school in Australia and New Zealand, will accompany the expedition, with berths also for sale to the public.

Inspired by Mawson’s efforts to raise funds, the team is also drawing on the crowd sourcing site Indiegogo to help finance the purchase of all-terrain vehicles – better known as ATVs – to travel across the sea ice.

Professor Turney, an Australian Research Council Laureate Fellow, is an expert in how the climate has changed in the past 2.5 million years and how people have evolved and migrated in response to these shifts. He has dated numerous archaeological sites, including the Indonesian cave where remains of Homo floresiensis – the tiny extinct species of humans known as the hobbits - were found in 2003. Dr Fogwill is a glacial geologist who reconstructs the configuration of the Earth’s ice sheets from hundreds to thousands of years ago.

The expedition will take measurements of the ocean water on the trip south, visit sub-Antarctic islands where they will collect sediment cores from lakes and peat bogs, and study the wildlife.

Once in Antarctica, they will drill ice cores and take geological samples to study the changing shape of the ice sheet. A drone will survey from the air and some scientists hope to venture under the ice.