UNSW chemists have invented a new type of tiny lab-on-a-chip device that could have a diverse range of applications, including to detect toxic gases, fabricate integrated circuits and screen biological molecules. 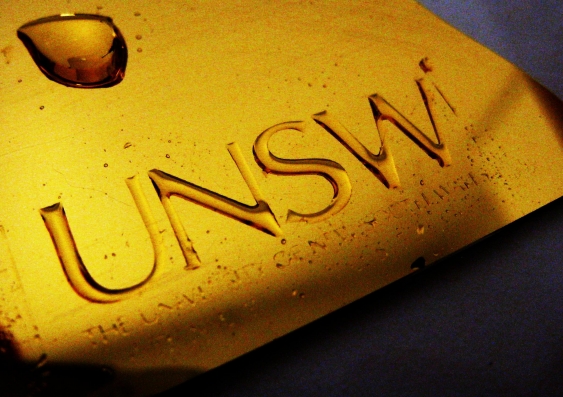 Salt on a chip: UNSW spelt out using an ionic liquid printed onto a gold surface about 1cm across

UNSW chemists have invented a new type of tiny lab-on-a-chip device that could have a diverse range of applications, including to detect toxic gases, fabricate integrated circuits and screen biological molecules.

The novel technique developed by the team involves printing a pattern of miniscule droplets of a special solvent onto a gold-coated or glass surface.

“We use a class of ‘green’ solvents called ionic liquids, which are salts that are liquid at room temperature.  They are non-volatile, so this overcomes one of the main problems in making useful miniaturised devices - rapid evaporation of the solvents on the chip,” says Dr Chuan Zhao, senior author of the study.

“The versatility of our chips means they could have a wide range of prospective functions, such as for use in fast and accurate hand-held sensors for environmental monitoring, medical diagnosis and process control in manufacturing.”

The research is published in the journal Nature Communications. It was carried out by Dr Zhao, Christian Gunawan and Mengchen Ge from the UNSW School of Chemistry.

Lab-on-a- chip devices, where chemical reactions are carried out on a miniature scale, are under intensive development because they offer the promise of faster reaction times, reduced use of materials and high yields of product.

Evaporation of solvents on the chip, however, is a big problem because this can affect the concentration of substances and disrupt the reactions. Attempted solutions include containing the solvents within tiny channels or “walls”, and having reservoirs to store extra solvent on the chip.

The “wall-less” design developed by the UNSW team - using non-volatile ionic liquids as solvents to fabricate a microarray of droplets chemically anchored to the chip - has several significant advantages.

“Ionic liquids are designer solvents and have wide application. We can now carry out many reactions or analytical procedures in ionic liquids at the micro-scale on a chip with enhanced yields and efficiency,” says Dr Zhao.

“These microarray chips can be easily produced in high numbers and are very stable. They can survive being turned upside down and heated to 50 degrees and some can even survive being immersed in another liquid. These properties will be important for commercial applications, including storage and transportation of microchips.”

The droplets of ionic liquid are about 50 micrometres across (about half the width of a human hair) and 10 micrometres high.

The UNSW researchers demonstrated several potential uses of the microarrays.

They showed the tiny droplets can act as rapid, sensitive monitors of the presence of a gas, due to their small volume.

They also demonstrated that metal salts dissolved in the droplets could be electrically deposited as microstructures, a technique which could be of use in fabrication of integrated circuits.

Some biological molecules added to the droplets also remained stable and active, opening up the possibility of using the microarrays for diagnostic purposes.