Researchers have identified a new species of mysterious beaked whale based on a study of seven animals stranded on remote tropical islands in the Indian and Pacific Oceans. 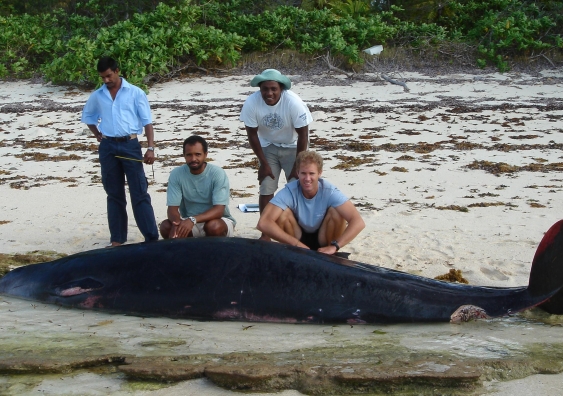 Male specimen of the new species on Desroches Island in the Seychelles. Image: Lisa Thompson

Researchers have identified a new species of mysterious beaked whale based on a study of seven animals stranded on remote tropical islands in the Indian and Pacific Oceans over the past 50 years.

Beaked whales, a widespread but little-known family of toothed whales distantly related to sperm whales, are found in deep ocean waters beyond the edge of the continental shelf throughout the world’s oceans.

“They are rarely seen at sea due to their elusive habits, long dive capacity and apparent low abundance for some species. Understandably, most people have never heard of them,” says international team leader, Dr Merel Dalebout, a visiting research fellow at UNSW.

The study of the new species, Mesoplodon hotaula, is published in the journal Marine Mammal Science.

The first specimen was a female found on a Sri Lankan beach more than 50 years ago.

On 26 January 1963, a 4.5 metre-long, blue-grey beaked whale washed up at Ratmalana near Colombo. The then director of the National Museums of Ceylon, P.E.P (Paulus) Deraniyagala, described it as a new species, and named it Mesoplodon hotaula, after the local Singhala words for ‘pointed beak’.

However, two years later, other researchers reclassified this specimen as an existing species, Mesoplodon ginkgodens, named for the tusk-like teeth of the adult males that are shaped like the leaves of a ginkgo tree.

“Now it turns out that Deraniyagala was right regarding the uniqueness of the whale he identified. While it is closely related to the ginkgo-toothed beaked whale, it is definitely not the same species,” says Dr Dalebout.

The researchers used a combination of DNA analysis and physical characteristics to identify the new species from seven specimens found stranded in Sri Lanka, the Gilbert Islands (now Kiribati), Palmyra Atoll in the Northern Line Islands near Hawai’i, the Maldives, and the Seychelles.

The new specimens are held by various institutions and groups, including the US Smithsonian National Museum in Washington DC, the Island Conservation Society in the Seychelles, and the University of Auckland, New Zealand. The genetic analyses were conducted as part of an international collaboration with the US NMFS Southwest Fisheries Science Center and Oregon State University.

The researchers were able to get good quality DNA from tissue samples from only one specimen.  For the others, they drilled the bones of the whales in order to analyse short fragments of ‘ancient DNA’ relying on techniques commonly used with old sub-fossil material from extinct species.

The researchers also studied all other known beaked whale species to confirm the distinctiveness of Deraniyagala’s whale, including six specimens of the closely related, gingko-toothed beaked whale.

“A number of species in this group are known from only a handful of animals, and we are still finding new ones, so the situation with Deraniyagala’s whale is not that unusual,” Dr Dalebout says.

“For example, the ginkgo-toothed beaked whale, first described in 1963, is only known from about 30 strandings and has never been seen alive at sea with any certainty. It’s always incredible to me to realise how little we really do know about life in the oceans. There’s so much out there to discover. ”

Over the last 10 years or so, two other new beaked whales have come to light; both through research in which Dr Dalebout was involved. In 2002, Mesoplodon perrini or Perrin’s beaked whale, was described from the eastern North Pacific, and in 2003, Mesoplodon traversii, the spade-toothed whale, was described from the Southern Ocean. Both species are known from only about five animals each.

With the re-discovery of Mesoplodon hotaula, there are now 22 recognised species of beaked whales.