Nobel laureate for Physics Professor Brian Schmidt described to a packed audience at UNSW the startling discovery that the universe is accelerating. 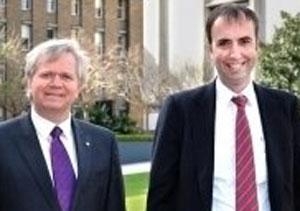 Nobel laureate for Physics Professor Brian Schmidt described to a packed audience at UNSW the startling discovery that the universe is accelerating.

Professor Schmidt, who shared the 2011 Nobel Prize in Physics with Saul Perlmutter and Adam Riess, yesterday deliverd the Dirac Lecture, hosted by UNSW's Faculty of Science.

He described how in 1998 two teams of researchers traced back the expansion of the universe over billions of years and discovered that it was accelerating, a startling discovery that suggests that more than 70% of the cosmos is contained in a previously unknown form of matter, called Dark Energy. Professor Schmidt led the High-Redshift Supernova Search Team.

He gave details of the discovery and explained how astronomers have used observations to trace our universe’s history back more than 13 billion years, leading them to ponder the ultimate fate of the cosmos.

The Dirac Medal for the Advancement of Theoretical Physics is awarded by UNSW jointly with the Australian Institute of Physics on the occasion of the public Dirac Lecture. The lecture and the medal commemorate the visit to the university in 1975 of one of the great theoretical physicists of the 20th Century, Professor Paul Dirac, who gave five lectures here at the time.

The lectures were subsequently published as a book Directions of Physics (Wiley, 1978 – H. Hora and J. Shepanski, eds.). Professor Dirac donated the royalties from this book to the university for the establishment of the Dirac Lecture series.

The prize includes a silver medal and honorarium. It was first awarded in 1979. The event was jointly sponsored by the Royal Society of NSW.