The Bragg UNSW Press Prize for Science Writing has been awarded to journalist Jo Chandler for her piece TB and me: a medical souvenir, about contracting the deadly disease in Papua New Guinea. 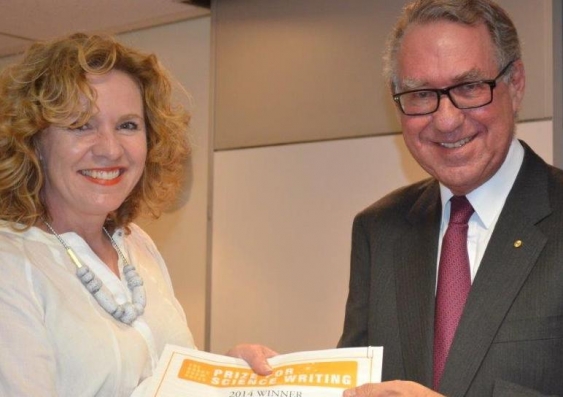 The Bragg UNSW Press Prize for Science Writing has been awarded to journalist Jo Chandler for her piece TB and me: a medical souvenir, about contracting the deadly disease in Papua New Guinea.

The $7000 prize was announced by UNSW Chancellor David Gonski AC at a ceremony last night hosted by UNSW Press and the UNSW Faculty of Science.

Runners-up prizes of $1500 each were awarded to Professor Frank Bowden for Eleven grams of trouble, about screening for prostate cancer, and to writer Peter Meredith for Weathering the Storm, about storm chasing in the Northern Territory.

The winning works appear in The Best Australian Science Writing 2014, the fourth in an acclaimed series of anthologies published by NewSouth Books featuring short, non-fiction pieces of writing about science and research for a general audience.

Mr Gonski commended UNSW Press for its commitment to popularising science and praised the authors for translating the wonders of science into a language that non-specialists – himself included – could understand.

“I want to congratulate all those printed in the book. I though it was absolutely wonderful. I enjoyed each story,” he said.

Mr Gonksi said Ms Chander’s marvellous personal account of her infection with TB, first published in the Global Mail, made him feel as if he was there, watching events unfold.

Ms Chandler previously won the Bragg UNSW Press Prize for Science Writing, which is supported by the Copyright Agency Cultural Fund, in 2012 and she was short-listed in 2013.

UNSW Dean of Science, Professor Merlin Crossley, said access to quality scientific information was critically important for democracy, to drive change and reform, and to counter the scientific nonsense that can often be found on the internet.

“And I am grateful for the work of all those writers who have helped spread science and scientific thinking,” he said.