Opinion Plumbing the depths: the search for water in our solar system and beyond

Not only is water associated with the formation of life, but extraterrestrial water can help us better understand the origin of water on Earth and its distribution within our planetary system, writes Lucyna Kedziora-Chudczer. 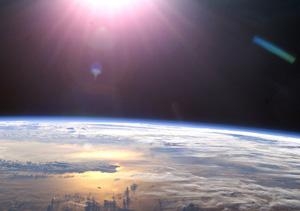 OPINION: Earth is the only planet in our solar system with a long-term, stable supply of liquid water – essential for the formation and evolution of all organic life. But this doesn’t mean there aren’t other pockets of water elsewhere in our solar system (and around other stars).

In searching for worlds we humans might one day try to inhabit, the presence of water is among the most pertinent considerations.

So where else should we be looking for water? How can we detect water on planets we can’t get to? And why is the search for water important anyway?

Water in our solar system

In 2003, two rovers named Opportunity and Spirit were sent to Mars, making convincing discoveries that implied Mars was once much wetter in its early history.

A major goal of the latest, more sophisticated mission – by lab-rover Curiosity – is to understand the role of water in the evolution of Mars, and therefore establish whether water-based life developed there at any point within the planet’s past.

Looking further out from the sun, research suggests water could exist in oceans deep beneath the icy surfaces of Jupiter’s moon Europa and Saturn’s moon Enceladus.

And then there are the possible pockets of frozen water on Mercury, as announced recently by NASA.

This most recent discovery hints at interesting possibilities for the potential for life on Mercury. That said, most scientists remain sceptical of even extremophiles – organisms that can survive in extreme environments – living there, based on current evidence.

While none of these examples constitutes evidence of life beyond Earth, it’s important to continue exploring any traces of water outside our own planet. Why?

Not only is water associated with the formation of life, but extraterrestrial water can help us better understand the origin of water on Earth and its distribution within our planetary system.

Most modern theories suggest the water in our planet’s oceans came from outside the Earth, possibly being delivered by comets or meteorites.

What then of water outside our solar system?

The latest, tantalising discovery is of a planetary system around a nearby sun-like star, Tau Ceti. Research from the University of Hertfordshire has revealed a planet orbiting the star within the so-called “habitable zone”, where water is expected to exist in the liquid state.

Currently, the detection of water on exoplanets by in-situ exploration is financially and technologically prohibitive. That said, astronomers are experts in “dissecting” and analysing the light collected from even the most distant and faint cosmic objects.

It is a fascinating testimony to this ability that a wide variety of planetary systems have been discovered around other stars.

In 2009, NASA launched the Kepler mission with the aim of detecting planets crossing in front of their parent stars. Three years on, the number of exoplanet candidates now counts in the thousands. Better still, there’s a significant possibility at least some of these planets harbour water.

The combination of radial velocities (the wobble of the planet’s host star due to orbital motion of the planet) and transit techniques (tracking a planet moving in front of its host star) can characterise the main physical properties of each planet – its mass, size and its density.

This is sometimes enough to decide if a detected planet is a gas giant like Jupiter or a rocky object similar to our own home-world.

Often the situation is not so clear. The transit method cannot distinguish between a large planet with a thin atmosphere and a small planet with a thick atmosphere. Both may appear to have the same radius, which may lead to errors in determining planetary density, given the absence of other information.

To resolve such ambiguities, astronomers typically resort to spectroscopy (the analysis of light waves and radiation) and polarimetry (looking at how light or radio waves have been polarised).

Both methods have been commonly used for the characterisation of space objects, but observations are much more challenging for extra-solar planets due to the extraordinary sensitivity and stability required.

Many gases present in planetary atmospheres absorb light at specific wavelengths, so the way light is absorbed in the observed “transmission spectrum” can be a rich source of information about the planet’s atmospheric composition.

Molecules such as water, carbon dioxide and methane absorb light very efficiently in the infrared portion of the elecromagnetic spectrum. Observations in this range are therefore immensely valuable in the quest for water detection.

So far only a handful of extrasolar planets have been examined in this way by the Hubble Space Telescope (HST) using the Near-Infrared Spectrometer.

Detections of water absorption bands were claimed for planets HD189733b in 2008 and HD209458b in the following year. These are some of the brightest transiting – i.e. creating the biggest drop in starlight – extrasolar planets found so far and therefore most comprehensively studied.

But subsequent observations by astronomy professor Frederic Pont and his collaborators, using upgraded instruments on the HST, dispute these earlier findings.

Such stories serve as a bitter reminder that the instruments used for these challenging observations are reaching the limits of their design capabilities.

An eye to the future

Fortunately, new and more-sensitive instrumentation is being built for the largest international ground-based telescopes, such as the 8m Very Large Telescope on Cerro Paranal in Chile and the 10m Keck telescopes on Mauna Kea in Hawaii.

In this way, opportunities are opening for the detection of water absorption in the spectra of even fainter, less-massive planets.

GJ1214b is one such object which was discovered through transit observations. The planet is just a few times bigger than Earth and its low density and close proximity to its parent star imply the planet could be covered with an ocean of water.

As expected, a frenzy of spectroscopic investigations has erupted at ground-based and space telescopes in order to distinguish the possibility of a water ocean from other alternatives (such as the presence of a very thick hydrogen-dominated atmosphere). To date, the debate about GJ1214b’s atmospheric composition has not been resolved.

Of course, the question of extraterrestrial life and habitability of other planets is a strong driver for building new state-of-the-art instrumentation for astronomy.

In the years to come the Earth-sized planets discovered by the Kepler mission and other similar projects will become the certain targets for further investigation.

And, with any luck, we’ll soon discover the presence of liquid water on worlds other than our own.

Lucyna Kedziora-Chudczer is a Postdoctoral Fellow and an Astrophysics Researcher at UNSW.