Quantum researcher Michelle Simmons has been awarded a prestigious Australian Laureate Fellowship and her PhD student has won the 2013 Bragg Gold Medal for Excellence in Physics. 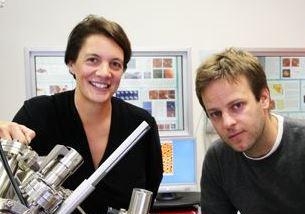 UNSW Scientia Professor Michelle Simmons has been awarded a prestigious Australian Laureate Fellowship and her PhD student, Dr Martin Fuechsle, has won the 2013 Bragg Gold Medal for Excellence in Physics.

Professor Simmons, director of the ARC Centre of Excellence for Quantum Computation and Communication Technology, is one of only 17 outstanding Australian researchers to have received the five-year fellowships, announced today by the federal Minister for Science, Senator Kim Carr.

Her research group in the UNSW School of Physics is the only one in the world that can make atomically precise devices in silicon.

Professor Simmons will use the new funding of more than $2.5 million to continue her team’s research aimed at achieving the ultimate in computer miniaturisation:  to develop components for the world’s first integrated circuit where all elements are constructed on the atomic scale.

“All of the 2013 Australian Laureate Fellows have distinguished research careers and these fellowships will help them extend their research efforts and contribute even further to improving the lives of all Australians,” Senator Carr said.

The Bragg Gold Medal from the Australian Institute of Physics recognises the PhD student who is judged to have completed the most outstanding PhD thesis in physics at an Australian university in the past year.

Each university is only allowed a single nominee each year and Dr Fueschle won for his thesis titled “Precision Few-Electron Silicon Quantum Dots.”

The last UNSW winner of the medal was Dr Frank Reuss, in 2008, who was also supervised by Professor Simmons.

The researchers created a working transistor consisting of a single phosphorus atom placed precisely in a silicon crystal, achieving a technological milestone ten years ahead of industry predictions.

Professor Simmons was awarded a QEII Fellowship in 1999 and came to Australia from the University of Cambridge to be a founding member of the Centre of Excellence for Quantum Computer Technology.

In 2005 she was awarded the Pawsey Medal by the Australian Academy of Science and in 2006 became one of the youngest elected Fellows of the Academy.

In another boost for the Centre of Excellence for Quantum Computation and Communication Technology, its deputy director, Professor Llloyd Hollenberg, of the University of Melbourne, was also awarded a 2013 Australian Laureate Fellowship.

The average amount of the award for fellows is $2.79 million over five years, including a salary supplement and funding for project costs and postgraduate and postdoctoral researchers.