A TV documentary about the discovery in China of the remains of a new species of prehistoric human, featuring UNSW scientist Darren Curnoe, airs on ABC TV this week. 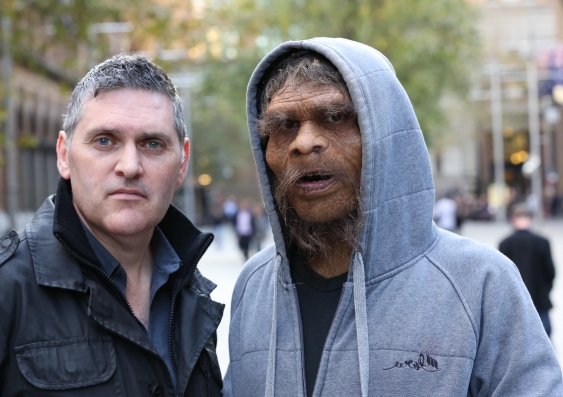 Associate Professor Darren Curnoe and an actor made up as a Red Deer Cave man. Image: Electric Pictures

UNSW scientist Associate Professor Darren Curnoe features in a new TV documentary about his discovery of the remains of prehistoric humans in China – dubbed the Red Deer Cave people.

The Red Deer Cave people were archaic humans with a unique mix of primitive and modern features who lived in south-west China very recently – between 14,500 and 11,500 years ago.

The discovery, by a team led by Associate Professor Curnoe and Professor Ji Xueping of Yunnan University in Kunming, made headlines around the world in 2012 when it was published in the journal PLoS One.

Last year it was named the top archaeological research finding in the world for 2011-2012 at the Shanghai Archaeological Forum established by the Chinese Academy of Social Sciences.

The documentary follows Associate Professor Curnoe and his colleagues as they search for clues about who these highly unusual people were, how they lived and their connection to modern humans who were living in China at the same time.

Enigma Man was written and directed by Daniella Ortega and produced by Electric Pictures and is divided into two main parts, including a drama reconstruction shot in the forest of northern NSW.

A prosthetic make-up team undertook detailed work to bring the Red Deer Cave people to life, with one of the characters even taking a head-turning walk through Sydney’s central business district.

Filming for the documentary was also carried out in the remote Red Deer Cave, where the fossils were originally found, and in institutes in Yunnan where they are housed and studied.