UNSW scientist and national sailing champion, Dr Federico Lauro, is leading a scientific expedition to sample the waters of the Indian Ocean. 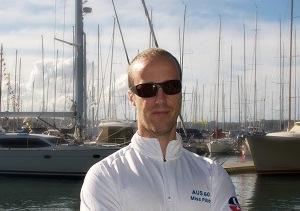 UNSW scientist and national sailing champion, Dr Federico Lauro, is leading an intrepid scientific expedition that sets sail in May to sample the waters of the Indian Ocean.

An international team of researchers on board a 61 foot (18 metre) yacht - Indigo V - will collect the microorganisms that inhabit the remote waters as they sail the 10,000 kilometres from South Africa to Singapore.

“The microbes in the sea help sustain life on Earth, but the Indian Ocean is mostly unexplored and little is known about the microbes that live there.  Our expedition will sail from pristine waters into the busiest shipping lane on the planet, to gauge the impact of human activity. We will cross from cool, nutrient-rich waters to the warm, nutrient-poor waters to see how microbial diversity changes,” Dr Lauro said.

Italian-born Dr Lauro won the Australian Championship in the Yngling sailing class in 2010, and was also a national sailing champion twice in Italy in the 1990s. Last year he came fourth in the world in the Yngling class.

He has been sailing his whole life, holds a Yachtmaster Ocean Licence and is also an expert in microbial genomics in the UNSW School of Biotechnology and Biomolecular Sciences.

Dr Lauro said that when the opportunity arose for him to deliver the Nautor Swan 61 to Singapore, he discussed it with his UNSW colleague, Dr Mark Brown. “Mark said it was a perfect opportunity to turn the voyage into a scientific research expedition. Then a lot of other scientists became interested in joining us too.”

They will conduct a range of experiments:

·         Collect and filter water samples four times a day, storing the microbes in a freezer.
·         Record water characteristics such as temperature, salinity and pH
·         Analyse the DNA and RNA of the microbes to identify new genes and determine whether gene activity varies between night and day.
·         See how the microbial life varies with latitude, and between pristine and busy areas.
·         Test the health of the phytoplankton, which produce much of the oxygen we breathe
·         See how much nitrogen is incorporated by the microbes in different regions
·         Identify the microbes that live in oxygen-free zones at about 100 metres depth
·         Compare samples from equatorial regions with those taken exactly seven years ago by US geneticist, Dr Craig Venter.

The six month-long expedition, which stops in Mauritius, Chagos Archipeligo, the Maldives and Thailand, will cost about $100,000. “We will do the whole trip for less than what an oceanographic ship costs for one day,” Dr Lauro said.

UNSW Scientia Professor Brett Neilan said the expedition was a good example of UNSW’s leadership in aquatic microbiology, a research area at the University which is set for further expansion.

Dr Lauro said he hoped the expedition would convince some of the thousands of private yachts that sail around the world each year to become floating microbial observatories and take simple scientific equipment with them to collect water samples and monitor the health of the world’s oceans.