Scientists on a UNSW-led expedition to study microbes in the Indian Ocean have weathered huge seas, encountered giant whales and collected lots of data during the first leg of their voyage from South Africa to Mauritius. 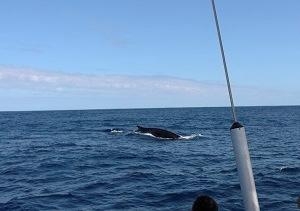 Scientists undertaking a UNSW-led expedition to study microbes in the Indian Ocean have weathered huge seas and had a close encounter with giant whales during the first leg of their voyage from South Africa to Mauritius.

“We have also collected lots of data. The scientific part of the expedition has been successful beyond our wildest dreams,” says expedition leader, Dr Federico Lauro, a UNSW microbiologist and national sailing champion.

Members of the UNSW-led team set sail in late May from Cape Town in an 18 metre yacht – Indigo V – and recently arrived in Port Louis in Mauritius.

Dr Lauro is back in Sydney, preparing for the next three legs of the 10,000-kilometre long voyage. The expedition will restart in September, sailing from Mauritius to the Maldives, on to Phuket and then to the final destination, Singapore.

Ocean microbes help sustain life on Earth but little is known about those in the Indian Ocean, which contains some of the most under-sampled waters on the globe.

The boat is specially equipped to record water characteristics such as temperature, salinity and pH. Water samples are routinely collected, filtered and the microbes frozen for genetic analysis back in the laboratory.

An on-board study also checks the health of the phytoplankton, which provide much of the oxygen we breathe, and how this relates to nutrient levels, currents, water temperature and latitude.

On the way to Mauritius the boat encountered a wild storm with sustained gusts of more than 45 knots and waves more than 15 metres high. “They were the biggest waves I have ever seen,” says Dr Lauro, who is an experienced ocean sailor.

The boat was also were surrounded at one stage by a pod of Bryde’s whales that swam so close  the sailors could smell the whales’ breathe.

“We pulled up the sails, so we could get out of their way, but the pod kept following us. When we changed course, the whole pod would change course with us,” says Dr Lauro.