The city is teeming with wildlife, so look and listen, urges Merlin Crossley. 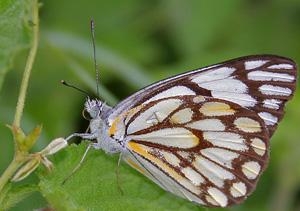 OPINION: None of us will be the first to land on the moon or to climb Mount Everest. It's too late for that. But it's not too late to see the first caper white butterfly that will fly through Sydney in 2013. Opportunities to find the first greengrocer cicada of the year, to spot the first channel-billed cuckoo chick, or watch the first whale swim by are also up for grabs.

We might seldom celebrate the first blowfly of summer in the same way people in Britain write to newspapers announcing the first cuckoo of spring, and we don't have the distinct seasons they do. But we have a wonderful cycle of natural life in the city and my New Year's resolution is to list all my first-sightings on the Leunig calendar in the kitchen.

The aim won't be to track climate change or monitor the rise or fall of species but simply to mark key events, so my family can enjoy anticipating them even more next year.

Sydney has some very beautiful street trees and in autumn the first yellow wattle flowers, probably of the dusty silver-leafed varieties, the Mt Morgan or Cootamundra wattles, will appear. Exotic tree species won't be excluded from the calendar and the first purple hue to appear on the tibouchinas and jacarandas will be recorded later in the year.

The first golden grevillea flowers on the silky oaks and the first red bottlebrushes on the callistemons will have a double significance. Bats and honeyeaters are attracted to these flowers; they are feeding on them now, so a first summer sighting and a first post-winter one as well might have to be jotted down.

Many migratory birds visit Sydney but my favourites are the channel-billed cuckoos. Perhaps the noisiest bird in the air, you can see them being chased across the sky while squawking loudly with a call that sounds like it should come from a large goose. They fly from New Guinea and lay their eggs in the nests of currawongs and magpies, which seem remarkably well aware of how dangerous the interlopers are, and never let them rest.

Another cuckoo - the first koel of the season - will make its presence felt loudly with a wake-up call before dawn. The shining black males sit on top of the tallest tree in our neighbourhood and call repeatedly while the females eat red berries from our palm trees. Early signs of ibis nesting in a palm tree in the middle of a roundabout near our house will also be noted. And my children will scour the local parklands for the first ducklings; we often see clutches of up to 10 racing after their mothers, shadowed below the surface by large eels which have come all the way from New Caledonia to live in local ponds.

The first blue triangle butterflies to hover over the camphor laurel shoots and lay eggs will be keenly awaited. So, too, will the orchard butterflies - the largest butterflies commonly in Sydney - that lay on the citrus plant shoots.

And when November comes around again, let's hope for a good caper white migration. In 2004 there was a terrific event. Sitting on our back porch we could see more than one butterfly a minute for several days.

The annual Bogong moth migration will also be cause for celebration. But let's hope for a better time for Christmas beetles in 2013. Those who are lucky will find a green one, although even a few more brown ones would be welcome.

The first noises of cicadas will mark another summer. At some stage my children will bring in the empty cicada shells and we'll look among the branches, following the sound, and hope to see greengrocers (and their variants yellow mondays), black princes, dusty bakers and cherry noses.

Different species spend different periods of time underground as larvae, making it difficult to predict which will dominate in 2013. These periods are not random but often correspond to prime numbers, such as three, five, seven and 11 years, which means there's less chance the cicada will emerge in synchrony with a predator of a life cycle of, say, two years.

For a big city, Sydney's urban wildlife is quite remarkable and, fortunately, the number of people interested in it is growing. All the organisations and home gardeners who have preserved landscapes in the city and planted wildlife-friendly gardens deserve thanks. Hopefully, one day someone will write to a newspaper to celebrate the first koala feeding in Centennial Park, or perhaps the first platypus.