Secrets of the Century

UNSW is helping scientists map the genomes of our oldest citizens in an international competition pushing the barriers of science and technology. 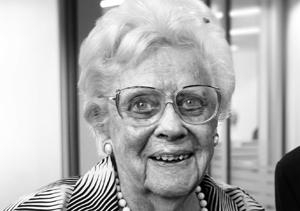 In 1942, fearful of an imminent Japanese invasion of northern Australia, 28-year-old missionary Margaret Somerville led 95 Aboriginal children and staff on a 3,000 kilometre journey to safety.

The six-week flight by foot, canoe, truck and train across Australia is retold in Somerville’s book, They Crossed a Continent and in the documentary film Croker Island Exodus.

More than 70 years later, Somerville is embarking on another epic journey and race against time – this time in the name of science.

The Sydneysider, who turns 100 this year, is one of 17 potential Australian candidates in an international competition to map the genomes of 100 people aged 100 and over, run by the US-based, not-for-profit X Prize Foundation.

Once the final 100 centenarians are chosen their DNA will be distributed to competing laboratories that must map the genomes within 30 days and spend no more than $1,000 per individual genome.

With $10 million in prize money on offer to the first laboratory to achieve the feat, the competition will “push the barriers of science and technology”, says Dr Charlene Levitan from the School of Psychiatry.

Levitan and Scientia Professor Perminder Sachdev lead UNSW’s Sydney Centenarian Study – the only Australian research group approached to recruit participants for the competition, which begins in January next year.

Four is the “magic” number