One of the world’s strangest animals – a legless, leaping fish that lives on land –uses camouflage to avoid attacks by predators such as birds, lizards and crabs, new research shows. 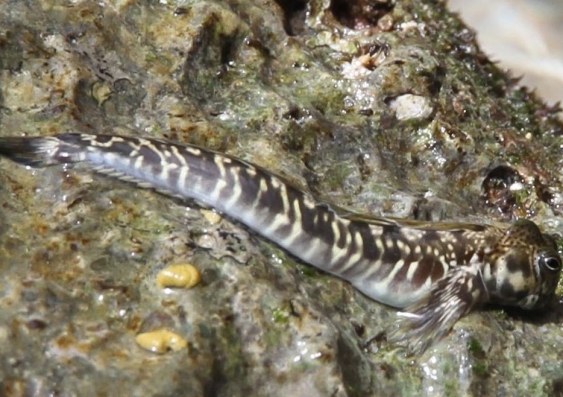 A male Pacific leaping blenny on the island of Guam. Photo: Courtney Morgans/UNSW.

One of the world’s strangest animals – a legless, leaping fish that lives on land - uses camouflage to avoid attacks by predators such as birds, lizards and crabs, new research shows.

UNSW researchers, Dr Terry Ord and Courtney Morgans, of the Evolution and Ecology Research Centre, studied the unique fish – Pacific leaping blennies - in their natural habitat on the tropical island of Guam.

Their study will be published in the journal Animal Behaviour.

“This terrestrial fish spends all of its adult life living on the rocks in the splash zone, hopping around defending its territory, feeding and courting mates. They offer a unique opportunity to discover in a living animal how the transition from water to the land has taken place,” says Dr Ord, of the UNSW School of Biological, Earth and Environmental Sciences.

The researchers first measured the colour of five different populations of the fish around the island and compared this with the colour of the rocks they lived on. “They were virtually identical in each case. The fish’s body colour is camouflaged to match the rocks, presumably so they aren’t obvious to predators,” says Dr Ord.

To see if background matching reduced predation, the researchers created realistic-looking models of blennies out of plasticine. “We put lots of these model blennies on the rocks where the fish live, as well as on an adjacent beach where their body colour against the sand made them much more conspicuous to predators,” says Dr Ord.

“After several days we collected the models and recorded how often birds, lizards and crabs had attacked them from the marks in the plasticine. We found the models on the sand were attacked far more frequently than those on the rocks.

“This means the fish are uniquely camouflaged to their rocky environments and this helps them avoid being eaten by land predators.”

The researchers then studied the body colour of closely related species of fish, some of which lived in the water and some of which were amphibious, sharing their time between land and sea.

“These species provide an evolutionary snapshot of each stage of the land invasion by fish,” says Dr Ord.

The Pacific leaping blenny, Alticus arnoldorum, is about four to eight centimetres long and leaps using a tail-twisting behaviour. It remains on land all its adult life but has to stay moist to be able to breathe through its gills and skin.

Watch a video of the fish leaping: