The first evidence of water ice clouds on an object outside of our own Solar System has been discovered by an international team including UNSW’s Professor Chris Tinney. 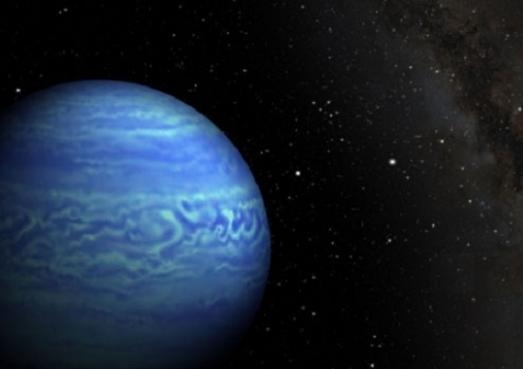 The first evidence of water ice clouds on an object outside of our own Solar System has been discovered by an international team including UNSW’s Professor Chris Tinney.

Water ice clouds exist on our own gas giant planets - Jupiter, Saturn, Uranus, and Neptune - but have not been seen outside of planets orbiting our Sun until now.

The findings by the team, which was led by Dr Jacqueline Faherty of the Carnegie Institution for Science in Washington, are published in The Astrophysical Journal Letters.

The team used the FourStar near infrared camera at the Las Campanas Observatory in Chile to detect the coldest brown dwarf ever characterised.

Their findings are the result of 151 images taken over three nights and combined. The object, named W0855, was first seen by NASA's Wide-Field Infrared Explorer mission and published earlier this year. But it was not known if it could be detected by Earth-based facilities.

"This is a great result. This object is so faint and it’s exciting to be the first people to detect it with a telescope on the ground,” says Professor Tinney, of the UNSW School of Physics.

Dr Faherty says it “was a battle at the telescope to get the detection.”

A comparison of the team's near-infrared images of W0855 with models for predicting the atmospheric content of brown dwarfs showed evidence of frozen clouds of sulfide and water.

"Ice clouds are predicted to be very important in the atmospheres of planets beyond our Solar System, but they've never been observed outside of it before now," says Dr Faherty.

Brown dwarfs are objects that are neither very small stars nor giant planets.

Their temperatures can range from nearly as hot as a star to as cool as a planet, and their masses also range between star-like and giant planet-like. But they are too small to sustain the hydrogen fusion process that fuels stars.

They are of particular interest to scientists because they offer clues to star-formation processes, and they are much easier to study than planets, because they are commonly found in isolation.

W0855 is the fourth-closest system to our own Sun, practically a next-door neighbor in astronomical distances.

The team included Carnegie’s Andrew Monson and Dr Andrew Skemer of the University of Arizona.

Watch a video about the discovery