A UNSW-led team of researchers studying dolphins that use sponges as tools has shown that social behaviour can shape the genetic makeup of an animal population in the wild. 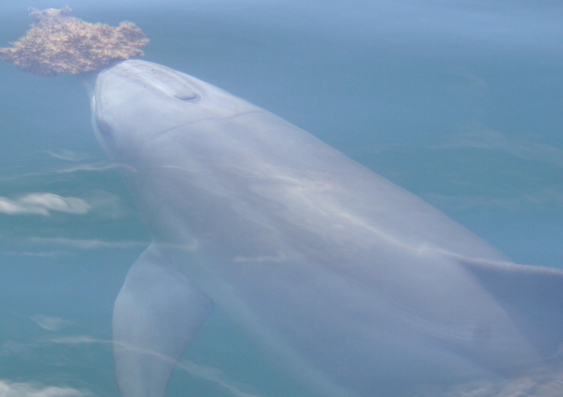 A dolphin with a sponge on its rostrum.

A UNSW-led team of researchers studying bottlenose dolphins that use sponges as tools has shown that social behaviour can shape the genetic makeup of an animal population in the wild.

Some of the dolphins in Shark Bay in Western Australia put conical marine sponges on their rostrums (beaks) when they forage on the sea floor – a non-genetic skill that calves apparently learn from their mother.

Lead author, Dr Anna Kopps, says sponging dolphins end up with some genetic similarities because the calves also inherit DNA from their mothers. As well, it is likely that sponging dolphins are descendants of a “sponging Eve”, a female dolphin that first developed the innovation.

“Our research shows that social learning should be considered as a possible factor that shapes the genetic structure of a wild animal population,” says Dr Kopps.

“It is one of the first studies to show this effect – which is called cultural hitchhiking – in animals other than people.”

Dr Kopps and her colleagues identified individual dolphins in western Shark Bay about 850 kilometres north of Perth. They observed them from a boat as they foraged for food, travelled around the bay, rested, and played with other dolphins.

Genetic samples were also taken, and analysed for mitochondrial DNA type, which is only inherited from the mother.

It was found that the dolphins that lived in shallow waters, where sponges do not grow, mainly fell into a genetic group called Haplotype H.

The dolphins living in deep waters, where sponges do grow, were predominantly Haplotype E or Haplotype F.

“This striking geographic distribution of a genetic sequence cannot be explained by chance,” says Dr Kopps, who carried out the research while at UNSW and is now at the University of Groningen.

As well, the DNA results from 22 dolphins that both lived in deep water and used sponges as tools showed they were all Haplotype E.

“For humans we have known for a long time that culture is an important factor in shaping our genetics. Now we have shown for the first time that a socially transmitted behaviour like tool use can also lead to different genetic characteristics within a single animal population, depending on which habitat they live in” she says.

The team includes UNSW’s Professor Bill Sherwin and researchers from the University of Zurich and Murdoch University.