Poisoning of dingoes – the top predators in the Australian bush – has a deleterious effect on small native mammals such as marsupial mice and bandicoots, a UNSW-led study shows. 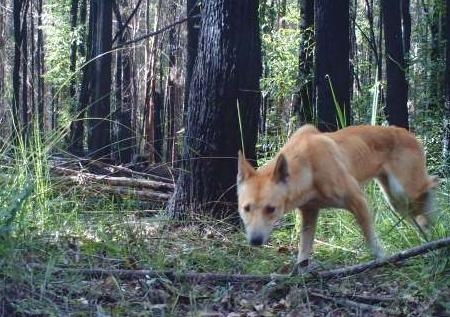 A dingo in the NSW bush. Image: Charlotte Mills

Poisoning of dingoes – the top predators in the Australian bush – has a deleterious effect on small native mammals such as marsupial mice, bandicoots and native rodents, a UNSW-led study shows.

The research, in forested National Parks in NSW, found that loss of dingoes after baiting is associated with greater activity by foxes, which prey on small marsupials and native rodents.

As well, the number of kangaroos and wallabies increases when dingoes, also known as wild dogs, disappear. Grazing by these herbivores reduces the density of the understorey vegetation in which the small ground-dwelling mammals live.

“Dingoes should not be poisoned if we want to halt the loss of mammal biodiversity in Australia. We need to develop strategies to maintain the balance of nature by keeping dingoes in the bush, while minimising their impacts on livestock,” says the senior author, UNSW’s Dr Mike Letnic.

The researchers surveyed seven pairs of forested sites within conservation reserves managed by the NSW National Parks and Wildlife Service.

Baiting of dingoes with 1080 poison had been carried out at one location in each pair, but not the other. Apart from the resulting difference in the number of dingoes present, the pairs of locations had similar eucalypt coverage, geology and landforms, and were less than 50 kilometres apart.

“This provided an extraordinary natural experiment to compare the impact of the loss of dingoes on a forested ecosystem,” says Dr Letnic, an ARC Future Fellow in the Centre for Ecosystem Science in the UNSW School of Biological, Earth and Environmental Sciences.

The activity of dingoes, foxes, feral cats and bandicoots was assessed from their tracks. Kangaroos and wallabies and possums were counted from the back of a four wheel drive. Traps were used to catch marsupials and native rodents, and surveys of vegetation were carried out.

“Predation by foxes is one of the most important threats to small native mammals, and grazing by herbivores can reduce their preferred habitats for shelter, leaving them exposed to predators.”

The study’s findings in the forested areas are consistent with the effects of dingo removal in desert areas of Australia.

“Actively maintaining dingo populations, or restoring them in areas where they have been exterminated, is controversial but could mitigate the impacts of foxes and herbivores,” says Dr Letnic.

“Poisoning of dingoes is counter-productive for biodiversity conservation, because it results in increases in fox activity and declines of small ground-dwelling native mammals.”