The world is on an unsustainable pathway that threatens the environment, future prosperity and security, a capacity audience attending the 2014 Fenner Conference on the Environment has been told. 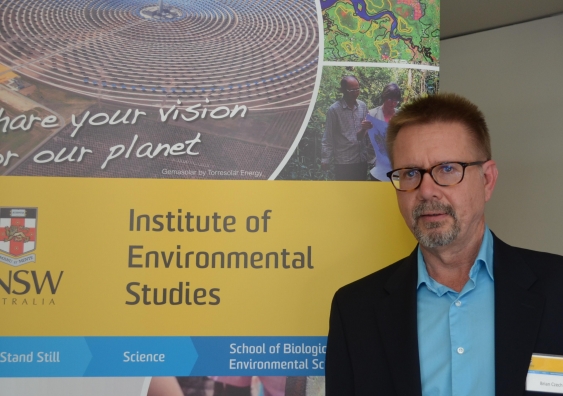 Dr Brain Czech, President of the Centre for the Advancement of the Steady State Economy in Washington

The world is on an unsustainable pathway that threatens the environment, future prosperity and security, a capacity audience attending the 2014 Fenner Conference on the Environment at UNSW has been told.

Keynote speaker, Dr Brian Czech, President of the Centre for the Advancement of the Steady State Economy in Washington, called for the current goal of economic growth to be replaced with that of a steady state economy.

“There is a limit to economic growth on a finite planet,” he said.

Continued growth, where more and more natural resources are consumed and more and more waste is produced, would lead to greater biodiversity loss, air and water pollution and climate disruption.

Yet a healthy environment was vital for a prosperous economy and social cohesion.

Dr Czech said the policies for moving to a sustainable, steady state economy were simple to identify: “You start out by stopping all the current buttons and levers that you’re setting now for a GDP growth and you ratchet those back in a gradualistic fashion towards a steady state.”

The sooner this happened, the better. But he admitted, the chances of concerted action in the near future were “nil”.

“For most of us that are in the steady state economy movement it is a lifetime project. But we expect that as the years and decades go by it is going to become very obvious to just about anybody that pulling out all the stops for growth is causing more and bigger problems, so we have got to stop doing that.”

The triggers for action could be more wars based on competition for resources, or a sustained period of “uneconomic growth”, where the costs of growth far outweigh the benefits, leading to “serious crises”, he said.

The United Nations has classified five types of uneconomic growth:

Other speakers included businessman Dick Smith, who said people buy too many goods they don't need, and former poltician, Dr Carmen Lawrence, of the University of Wesrtern Australia, who said degradation of the environment leads to a degradation of human health.

The audience to the Fenner Conference was welcomed by Professor Graciela Metternicht, Director of the Institute of Environmental Studies at UNSW and the proceedings were opened by ABC science journalist and broadcaster Robyn Williams.

Addicted to growth – how to move to a steady state economy

Conservation in a crowded world