Towards a quantum internet

A UNSW-led team of researchers has achieved a breakthrough that brings a network of ultra-powerful quantum computers – connected via a quantum internet – closer to reality. 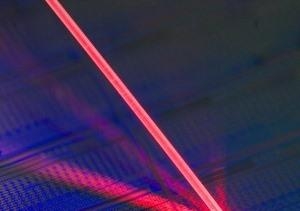 A UNSW-led team of researchers has achieved a breakthrough that brings the prospect of a network of ultra-powerful quantum computers – connected via a quantum internet – closer to reality.

The team is the first in the world to have detected the spin, or quantum state, of a single atom using a combined optical and electrical approach.

The study is a collaboration between researchers from the ARC Centre of Excellence for Quantum Computation and Communication Technology based at UNSW, the Australian National University and the University of Melbourne. It is published in the journal Nature.

“We have the best of both worlds with our combination of an electrical and optical system. This is a revolutionary new technique, and people had doubts it was possible. It is the first step towards a global quantum internet,” Professor Rogge said.

Quantum computers promise to deliver an exponential increase in processing power over conventional computers by using a single electron or nucleus of an atom as the basic processing unit – a quantum bit, or qubit.

Professor Rogge said researchers had previously used either an electrical or an optical method to read the spin of a single atom - where the information would be stored - but not both methods together.

Lead author of the study, UNSW’s Dr Chunming Yin, said the new approach opens up the possibility of using light to couple the atoms, or qubits, together to form a quantum computer.

“Using light to transfer information in the quantum state is easier than doing it electrically. Ultimately this will lead to quantum communications over long distances,” Dr Yin said.

Associate Professor Matthew Sellars, of the Australian National University, said it was a step towards connecting a solid state quantum computer to what will be the quantum internet.

“The quantum internet will allow separate quantum computers to be integrated and it will enable encrypted communications.”

To make the new quantum device, Associate Professor Jeffrey McCallum at the University of Melbourne used an ion implanter to shoot erbium atoms into a standard industrial silicon transistor.

When the atom was in a particular quantum state and laser light was shone on it, an electron was knocked off the atom. This was detected electrically, by the silicon transistor switching on.

Professor Rogge said the breakthrough was made possible by combining the expertise of the three groups. The next step would be to control the spin of the erbium atom, which should be relatively straightforward, and also to replicate their results using a phosphorus atom embedded in silicon.

The researchers said it will be at least another decade before the potential of quantum computation is fully realised.

For a backgrounder on quantum science see UNSW Science.

Video (in English and Mandarin) and Photos of researchers available.