Opinion Turn and burn: the strange world of fire tornadoes

Researchers and firefighters have long speculated that fire tornadoes might exist. Now we know they do, write Jason Sharples and Rick McRae. 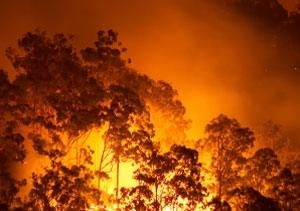 OPINION: We’ve all seen footage of out-of-control bushfires sweeping the Australian landscape, burning out hectares of native forest in their wake. But you might not have heard of a fire tornado, let alone seen one.

For many years now researchers have theorised that fire tornadoes could be possible. Now, in studying the 2003 Canberra bushfires, our colleagues and us have shown fire tornadoes do indeed exist.

So what are fire tornadoes? Where do they come from? And what sort of damage can they cause?

To answer these questions, we first need to understand a separate – but related – phenomenon: fire thunderstorms, also known as pyro-cumulonimbus clouds.

The fires that form these clouds are often burning such large tracts of land that full thunderstorms can form within their plumes.

Lightning from these storms often starts new fires, seen spectacularly in the January 2006 fire in the Grampians, Victoria.

Such clouds can also create black hail – a manifestation of the unusual cloud physics and massive quantities of entrained smoke. This phenomenon was reported in the 2003 Canberra bushfires.

But that’s not all – our research has now shown that pyro-cumulonimbus clouds (pyroCb) can also produce tornadoes.

Sometimes firefighters report seeing intense fire whirls – spinning columns of fire – and these are often erroneously called fire tornadoes. But these whirls are directly linked to the ground and to the heat generated by the fire – they are not true fire tornadoes.

A fire tornado is attached to the base of a pyroCb and, like a true tornado, it is a product of instability, moisture and wind shear. The low pressure core of a tornado is famous for picking up objects or water (as in a water spout).

But we’ve now confirmed it can also draw in flames if over a fire front, glowing more than a kilometre into the air.

Unlike the fire whirls observed by firefighters, the 2003 Canberra fire tornado was linked to the base of a thunderstorm, lifted off the ground, and then touched down again, three times.

What made this fire different to other fires was the wide range of observations being made as the edge of Australia’s capital was threatened.

We, in collaboration with our colleagues, then used these observations to determine the existence of the fire tornado.

We showed that the weather conditions the fires were burning in were also suitable for tornado formation. We mapped the damage path, from the air and on the ground and could track the tornado in weather radar data.

We placed the contents of photographs in the correct place and time. Ultimately we were able to measure a number of the tornado’s physical properties.

The tornado’s movement over ground was determined from detailed damage mapping and photographic triangulation. Its horizontal and vertical wind speeds were similarly measured and estimated from damage types, using the Enhanced Fujita Tornado Damage scale.

It is now clear that some houses on Canberra’s edge were destroyed by this tornado. Others were damaged by both wind and fire.

So, on top of the already-present risk of bushfires, we now know that residents of Canberra (and elsewhere) face the risk of a tornado bearing down on their home if a fire is particularly fierce.

This indicates that we need to see if the Building Code of Australia might be able to consider tornadic wind loadings in structural designs for bushfire-prone areas.

And, with the bushfire season already upon us, what better time to get such discussions underway.

Dr Jason Sharples is a Lecturer in the School of Physical, Environmental and Mathematical Sciences at UNSW Canberra. Rick McRae is a Researcher at the ACT Emergency Services Agency.