Two common viruses known to be associated with human cancers are both present – and may even be collaborating with each other – in most male prostate cancers, a new study suggests. 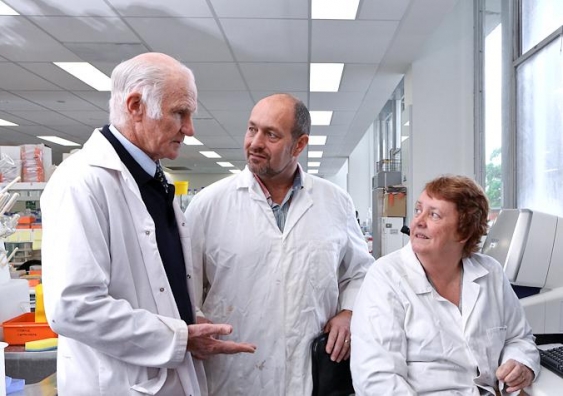 Two common viruses known to be associated with human cancers are both present – and may even be collaborating with each other - in most male prostate cancers, a new study suggests.

The research has revealed that both the human papilloma virus (HPV) and Epstein Barr virus (EBV) are present in more than half of malignant prostate cancers found in Australian men, as well as in a high proportion of benign and normal prostate samples.

Details of the study, led by Associate Professor Noel Whitaker and Professor James Lawson, of the UNSW School of Biotechnology and Biomolecular Sciences, are published in the journal The Prostate. The research team included other UNSW researchers and colleagues from the Department of Forensic Medicine Sydney South West Area Health Service and Douglass, Hanly, Moir Pathology.

“Recent unpublished experimental evidence by other researchers suggests that HPV and EBV can collaborate to promote the survival and proliferation of cancer cells, so our findings may well have important implications for understanding and preventing prostate cancer,” says Professor Whitaker.

“Significantly, in our prostate samples we found a high-risk strain known as HPV 18, which is known to be associated with other human cancers.

“HPV 18 is a common high-risk strain in Australia and is a specific target of the Gardasil vaccine now offered free to teenage girls to protect against cervical cancer.

“We note recent proposals to offer Gardasil to Australian teenage boys as well, with the aim of preventing the spread of the virus to women through sexual contact. If HPV 18 is also associated with prostate cancers, as our research suggests, vaccinating boys may yet prove to have an unexpected direct benefit for them as well.”

EBV has also been linked to head and neck cancers, particularly in south-east Asian countries: like HPV, it is spread mostly by close skin contact, leading it to be dubbed “the kissing disease”.

While HPV has been detected before in prostate cancers, this is one of only a few – and the first in Australia – to confirm the presence of both high-risk HPV and EBV in the same cancer tissues.

“I should caution that their presence is not conclusive of a role in prostate cancer,” says Professor Whitaker. “But given their well-established track record with other cancers, it would seem quite unlikely that they are harmless.”