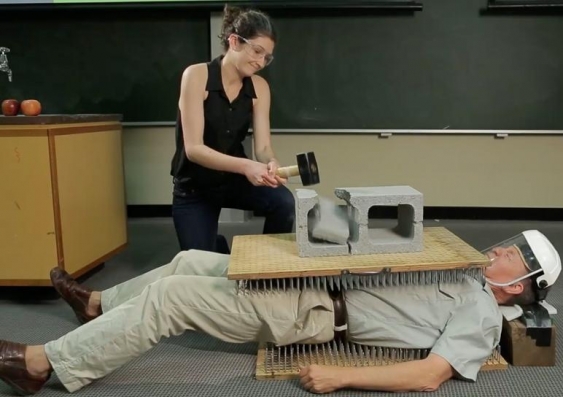 Don't do this at home ... A student breaks a brick on Professor Joe Wolfe to demonstrate the physics of collision. Photo: UNSW Physics

High school students can better prepare for science, engineering and technology courses at university, with the launch of UNSW’s first science Massive Open Online Course (MOOC) on the Coursera platform.

The MOOC, titled Mechanics: Motion, Forces, Energy and Gravity, from Particles to Planets, will commence on 25 August 2014.

In one experiment, award-winning UNSW physics lecturer Professor Joe Wolfe lies on a bed of nails while a concrete brick on his stomach is broken with a large mallet. “Don’t try this at home, but here is an experiment I’ve analysed carefully before I did it,” he says.

The course, which requires some simple high school mathematics but not calculus, is at the level of a quality, senior high school physics course. It includes more mechanics than in the HSC syllabus.

“First year physics at university usually starts with mechanics, so this course will get students off to a flying start. I hope they’ll find it fun, too,” says Professor Wolfe, who co-presents the course with UNSW’s Dr Elizabeth Angstmann.

The MOOC is also aimed at students around the world or in remote areas of Australia who may not have a physics teacher. “These students may never have discovered they are good at physics and may not have considered a career in science or engineering before,” says Professor Wolfe.

It could also interest people who want to brush up on their physics and those who simply want to learn about how the universe works.

“On a large scale, physics explains why stars orbit a huge black hole at the centre of our galaxy. On a much smaller scale, physics also explains the electrical events occurring in our brains when we think about the universe.

“In between, physics explains much of what goes on around us in the world,” says Professor Wolfe.

Physics is not only vital for careers in science, engineering and technology, the skills of physicists are also in demand in other professions, including physiology, finance and biomedical science.

UNSW announced in 2013 that it was joining some of the world’s leading universities in partnering with US-based Coursera, the largest provider of MOOCs.

UNSW’s first MOOC – Introduction to Systems Engineering – attracted close to 30,000 enrolments, a significant increase on the average class size of 200 for postgraduate courses. The University's  second MOOC – Learning to Teach Online – is based on an award-winning educational resource of the same name developed at UNSW’s College of Fine Arts.

Professor Joe Wolfe has won national and international awards for teaching and for research. On the internet he’s best known for Physclips, a multi-media, multi-level introduction to physics. He leads a research laboratory that studies the acoustics of the voice, the ear and musical instruments. This lab also has a very popular website. When not doing science, Joe is a composer and player of orchestral and chamber music.

Dr Elizabeth Angstmann is a lecturer and the first year director of studies in physics at UNSW. She has taught many different first-year physics courses, including predominantly face-to-face courses as well as entirely online courses. Elizabeth worked as a high school science teacher for several years before returning to university teaching. She has a PhD in theoretical atomic physics from UNSW and a Master of Teaching from the University of Sydney.

More Videos: Overview, Who will take this course? Why Physics?