UNSW scientists have achieved a world first, publishing the complete DNA sequence of the Queensland fruit fly – a development that will improve both biosecurity and methods for controlling this global horticultural pest. 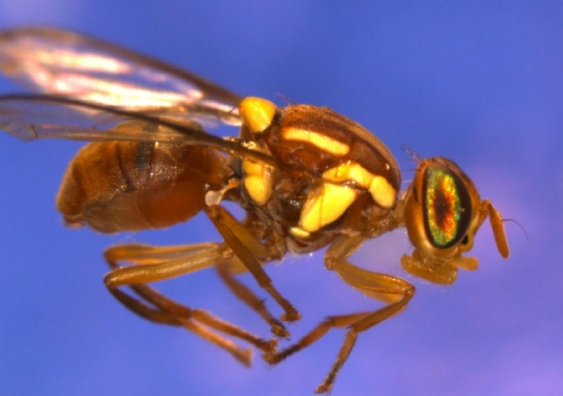 One of the true fruit fly species sequenced, Bactrocera jarvisi

UNSW scientists have achieved a world first, publishing the complete DNA sequence of the Queensland fruit fly – a development that will improve both biosecurity and methods for controlling this global horticultural pest.

The Queensland fruit fly, Bactrocera tryoni, is a “true” fruit fly – the much larger cousin of the little flies often seen buzzing around your fruit bowl.

“Consequently, there has been an informal race to publish the first complete genome of a true fruit fly. The UNSW group has won that race against other groups including the US Department of Agriculture.”

The study is published in the journal BMC Genomics.

The Queensland fruit fly lays its eggs in, and destroys, a wide variety of fruits and vegetables, including apples, citrus, stone fruits, avocadoes and tomatoes. It is a major problem for Australian fruit exporters. For example, Vietnam recently stopped importing Australian table grapes, citing concerns that the grapes may harbour Queensland fruit fly.

“In the short term, our study will assist in the fight by making it possible to develop better DNA tests.  We need better tests to identify our native fruit flies as well as invasive fruit flies from overseas.”

Despite being amazingly close relatives, the three species look different and have different behaviours. For example, B. neohumeralis mates in the middle of the day, while B. tryoni mates at dusk.

“These three species, which will mate in the laboratory, provide an extremely rare and valuable scientific tool for understanding how different species evolve,” says Dr Gilchrist.

“By comparing their small genetic differences it will be much easier than usual to pinpoint the genetic basis for different traits, such as reproduction, physical characteristics, host fruit preferences, attraction to odours, and potential to invade new areas.”