Six UNSW researchers have the honour of speaking at this year’s Science at the Shine Dome event in Canberra - a three-day gathering held by the Australian Aacademy of Science. 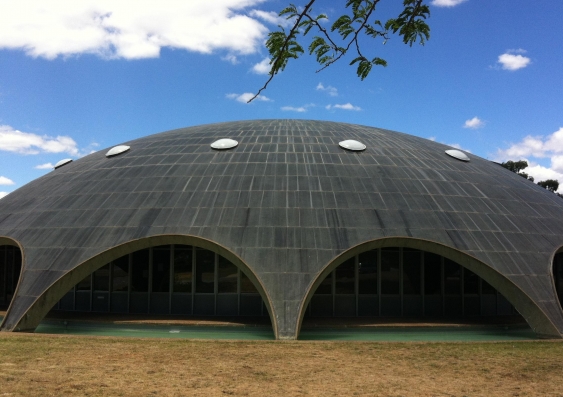 The Academy of Science's Shine Dome

Six UNSW researchers have the honour of speaking at this year’s Science at the Shine Dome event in Canberra.

The three-day gathering held in the Australian Academy of Science’s Shine Dome from Tuesday 27 to Thursday 29 May brings together the country’s foremost scientists, including several Nobel laureates.

This year marks the Academy’s 60th anniversary and the 2014 theme is Celebrating Australian science – PAST PRESENT FUTURE.

Professor Amal is leader of the Particles and Catalysis Research Group in the School of Chemical Engineering, as well as Director of the ARC Centre of Excellence for Functional Nanomaterials.

Professor England is an Australian Research Council Laureate Fellow, Deputy Director of the UNSW Climate Change Research Centre, and a Chief Investigator in the ARC Centre of Excellence for Climate System Science.

Professor Johnston, of the UNSW School of Biological, Earth and Environmental Sciences, is the inaugural winner of the Nancy Millis Medal for Women in Science for her leadership and groundbreaking research on human impacts on marine ecosystems.
She has also appeared regularly on TV, as a co-star of Coast Australia, and will participate in an Academy workshop for early career scientists on how to communicate science well.
Professor Chris Turney will receive the 2014 Frederick White Prize for his research on understanding past and present climate change and on improving climate change models. He is an Australian Research Council Laureate Fellow in the UNSW Climate Change Research Centre.
Associate Professor David Warton will receive the 2014 Christopher Heyde Medal for distinguished research in mathematical sciences by a researcher under the age of 40.
He is an Australian Research Council Future Fellow in the UNSW School of Mathematics and Statistics and his work focuses on developing statistical methodology to further ecological research.
On Thursday, Scientia Professor Michelle Simmons will give an address titled The quantum revolution: computing, past present future, joining other leading scientists as symposium speakers, including Nobel laureate, Professor Brian Schmidt, who will talk about physics in Australia, and Sir Gus Nossal, who will discuss medical science.
Professor Simmons is director of the ARC Centre of Excellence for Quantum Computation and Communication Technology at UNSW and is an ARC Laureate Fellow.
Science journalist and ABC broadcaster Robyn Williams, who is a member of the UNSW Science Advisory Council, will be the after-dinner speaker at the Academy’s annual dinner on Wednesday night.
Scientists, policy makers, educators and interested public are invited to attend the event. All presentations will be live streamed.

UNSW sparkles at Scientist of the Year awards