An increase in aridity due to global warming will disturb the balance of nutrients in the soil and reduce productivity of the world’s drylands, which support millions of people, a landmark study predicts. 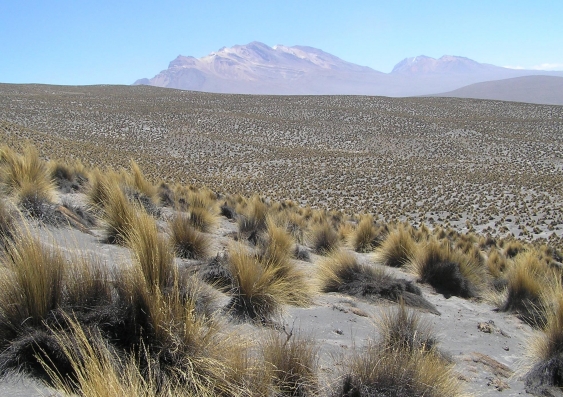 A dryland site in Peru that was sampled. Credit: D.Eldridge et al

An increase in aridity due to global warming will disturb the balance of nutrients in the soil and reduce productivity of the world’s drylands, which support millions of people, a landmark study predicts.

The research was conducted by a global collaboration of scientists who carried out the same studies of 224 dryland sites in 16 countries on every continent except Antarctica.

In Australia, woodland sites in NSW near Mildura were studied by UNSW’s Adjunct Professor David Eldridge, of the School of Biological, Earth and Environmental Sciences, who is a member of the international research team.

Other sites included areas of the Negev Desert in Israel, the Pampas lowlands in Argentina and the Altiplano highlands of Peru. Rainfall at the sites ranged from 100 to 800 mm per year, and all soil samples were analysed in the same laboratory in Spain.

The research shows that increasing aridity is associated with a reduction in carbon and nitrogen in the soil and an increase in phosphorus.

The results are published in the journal Nature.

“Drylands cover about 41 per cent of Earth’s land surface and support more than 38 per cent of the world’s population,” says Professor Eldridge, who also works for the NSW Office of Environment & Heritage.

“As the world’s population grows, people will increasingly rely on marginal lands – particularly drylands - for production of food, wood and biofuels. But these ecosystems will be severely affected by imbalances in the cycle of carbon, nitrogen and phosphorus.”

A worldwide decrease in soil moisture ranging from 5-15 per cent has been predicted for the 2080-2099 period.

Phosphorus in rocks and sediments is released into the soil by weathering, and levels are expected to increase as soils become drier and erode more.

This increase in phosphorus will be accompanied by reductions in carbon and nitrogen, which are more dependent on biological processes such as litter decomposition, photosynthesis and nitrogen fixation. Reduced plant cover will also exacerbate this effect.

“Plants need all of these elements, in the correct amounts and at the right times, but increasing aridity will upset this balance, leading to a breakdown in essential soil processes,” says Professor Eldridge.

The study was led by Manuel Delgado-Baquerizo, of Universidad Pablo de Olavide in Spain.