Opinion Why did the Tasmanian tiger go extinct?

The factors involved in the historical decline of contemporary mammals need to be identified to guard against future biodiversity loss, argues Marie Attard. 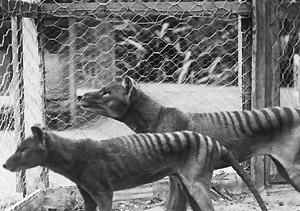 OPINION: Australia accounts for one-third of all contemporary mammal extinctions worldwide. At least ten species and six subspecies of Australian marsupials have become extinct following European settlement, and many more are now at a high risk of extinction.

We need to identify the factors involved in historical declines and extinctions to help guard against future biodiversity loss.

One of Australia’s most fabled species, the Tasmanian tiger, also known as the thylacine, went extinct on the continent’s mainland around 2000 years ago. A small population of thylacines persisted on Tasmania when Europeans arrived in Australia.

The species was rapidly viewed as a pest and a dangerous threat to livestock, though many of these claims were highly exaggerated. Over 2,000 bounties were paid by the government between 1888 to 1909 to eradicate the species. A sudden decline in the thylacine population was reported in the early 1900s, and the species was declared extinct in 1936.

The government bounty may seem to be the obvious extinction culprit. But growing scientific evidence reveals a complex tapestry of forces involved in their decline. Among these are competition with dogs, habitat loss and changing fire regimes leading to population fragmentation, and an epidemic disease that spread through the population in the 1920s.

A mounting body of evidence reveal that larger bodied species are at greater risk of extinction than smaller bodied species. As a large-bodied predator, relying on small prey would have been energetically constraining for thylacines: their food may have been inadequate to support them unless small prey were abundant.

Whether thyacines were capable of taking down large prey species like kangaroos, emus or adult sheep remains a contentious subject. Based on their teeth and jaw, it is almost certain that they were meat specialists. They don’t have the dental features associated with bone consumption and scavenging. Anecdotal evidence suggests thylacines may have taken large prey up to 30kg, such as kangaroos and emus. But few naturalists were present to record its foraging behaviour and many accounts are derived from unreliable or biased sources.

Morphological features, such as their extremely long snout and very low rates of canine tooth wear and fracture suggest they relied on small prey, though their wide gape may have allowed them to catch larger species.

Thylacines were thought to use caves as lairs, and have been associated with prey found in sub-fossil cave deposits. These ranged in size from 1 to 5kg. As prey brought back to a den may be the smaller species killed, they may not represent the full range of prey species killed by thylacines.

With the advancement of new techniques, it may be possible to conclusively evaluate the diet of the thylacine. The mechanical performance of the thylacine skull may provide clues into their mode of hunting and disclose limitations in the size of prey they could catch.

An engineering technique called “finite element analysis” was used to digitally construct the skull of the thylacine and two living relatives – the Tasmanian devil and spotted-tailed quoll. These are both capable of hunting large prey relative to their own body size. If thylacines were able to take down large prey, we would expect their skulls to perform similarly under different feeding simulations.

Computed tomography (CT) scans of each skull were digitised to create a three-dimensional model. Beams were attached to the skull to simulate the different jaw-closing muscles that act on the skull during chewing. We also tested common killing behaviours – including shaking, pulling and chomping down on a prey item. We obtained stress data from each simulation, which act as a good measure of failure in ductile materials such as bone.

To our surprise, we found that thylacines performed poorly compared to other marsupial carnivore in all simulations, and showed peak levels of stress at their snout. The long narrow snout suggests thylacines hunting alone were more suited to catching small-sized prey, such as bandicoots and possums. The findings of this study were published in the Journal of Zoology.

Family groups containing mature young may have been able to take down larger animals. In 1941, G. Stevenson described co-operative hunting of thyalcines: “they…jump on it. Kangaroos are killed by standing on them and biting through the short rib into the body cavity and ripping the rib cage open”.

For some predator species, group-hunting can reduce physical disadvantages, letting them kill larger prey. However, persecution by humans would have made co-operative hunting very difficult, and likely lead to an increase of solo hunters favouring small-sized prey.

Intensive competition for small prey by invasive species such as feral cats and dogs would have directly influenced the thylacine’s survival.

With improved understanding of the diet and movement of living and extinct marsupial carnivores, we can improve management strategies and help conserve our unique wildlife.

Marie Attard is a PhD student in the School of Biological, Earth and Environmental Sciences at the University of New South Wales.