When it comes to pool, there’s nothing worse than a shonky table: a new study has found the same goes at the nano-scale, where the “billiard balls” are electrons moving across a “table” made of semiconductor gallium arsenide. 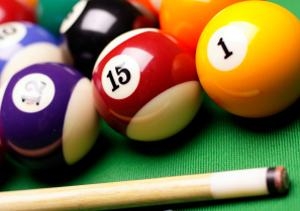 False colour scanning electron microscope image: the 'table' is the central green square region. The 'pockets' are narrowings that join to open green areas. The 'cushion' is the red trench that defines the device. White scale bar - 500 nanometres

There’s nothing worse than a shonky pool table with an unseen groove or bump that sends your shot off course: a new study has found that the same goes at the nano-scale, where the “billiard balls” are tiny electrons moving across a “table” made of the semiconductor gallium arsenide.

These tiny billiard tables are of interest towards the development of future computing technologies. In a research paper titled “The Impact of Small-Angle Scattering on Ballistic Transport in Quantum Dots”, an international team of physicists has shown that in this game of “semiconductor billiards”, small bumps have an unexpectedly large effect on the paths that electrons follow.

Better still, the team has come up with a major redesign that allows these bumps to be ironed out. The study, led by researchers from the UNSW School of Physics, is published in the journal Physical Review Letters.

The team included colleagues, from the University of Oregon (US), Niels Bohr Institute (Denmark) and Cambridge University (UK).

“Scaled down a million-fold from the local bar variety, these microscopic pool tables are cooled to just above absolute zero to study fundamental science, for example, how classical chaos theory works in the quantum mechanical limit, as well as questions with useful application, such as how the wave-like nature of the electron affects how transistors work,” says team member Associate Professor Adam Micolich. “In doing this, impurities and defects in the semiconductor present a serious challenge.”

Ultra-clean materials are used to eliminate impurities causing backscattering (akin to leaving a glass on the billiard table) but until now has been no way to avoid the ionized silicon atoms that supply the electrons.

Earlier studies assumed this warping was negligible, with the electron paths determined only by the billiard table’s shape (e.g. square, circular, stadium-shaped).

“We found that we can ‘reconfigure’ the warping by warming the table up and cooling it down again, with the electron paths changing radically in response,” says Professor Richard Taylor from the University of Oregon. “This shows that the warping is much more important than expected.”

Using a new billiard design developed during PhD work at UNSW by lead author Dr Andrew See, the silicon dopants are removed, eliminating the associated warping, and enabling the electron paths to stay the same each time they cool the device down for study.

But at the nanoscale, the dopant atoms really do make a really big difference, says Micolich, “Ultimately, our work provides important insight into how to make better nanoscale electronic devices, ones where the properties are both more predictable, and more consistent each time we use them.”