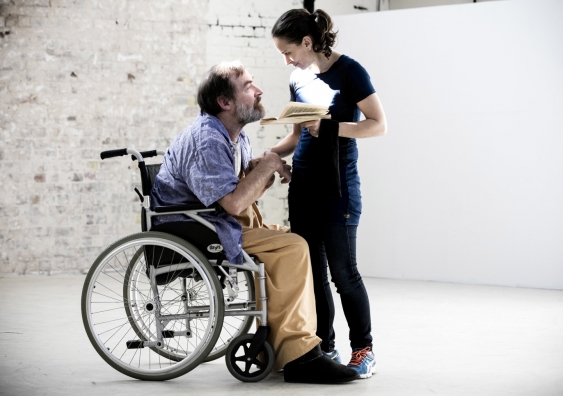 OPINION: Renowned Shakespearean actor Robert Armin wrote in 1608 of the difference between a “natural” and an “artificial” fool – the first of whom “that did his kinde, and the other who foolishly followed his owne minde”. Armin was writing long before industrial capitalism stepped in to humiliatingly frame those perceived to be impaired as “freakish” outcasts to productive labour.

His treatise, in fact, seems wedged between two very different performative lineages. For it was the “fact” of the natural fool’s disability that became aligned with ideas of depravity and so reinforced the very opposite ideal of rationality that underpinned a Renaissance concept of man. And it was the artificial fool, working as mimic, who both professionalised and commodified the natural fool’s jest, “liking the disguise”. Armin later asks – considering all – whether it is “a profit to be foolish?”

Armin had played and written roles for many of Shakespeare’s fools – notably Feste in Twelfth Night, whose particular brand of philosophical foolery is aimed at mediating the slim vanities of those who pomp around him.

Belvoir St Theatre’s 2016 production of Twelfth Night, directed by Eamon Flack, seems to want to play on this essential jest in the fool’s persona – his slippery unnerving of what is natural, his ambivalent marking of the pleasure in disguise.

Twelfth Night charts a series of impassioned fixations fuelled by mistaken identity. Count Orsino loves the veiled and cloistered Olivia; she loves the servant Cesario who is really the shipwrecked Viola tendering Orsino’s love to her, and of course Viola loves Orsino, blindly, it seems. 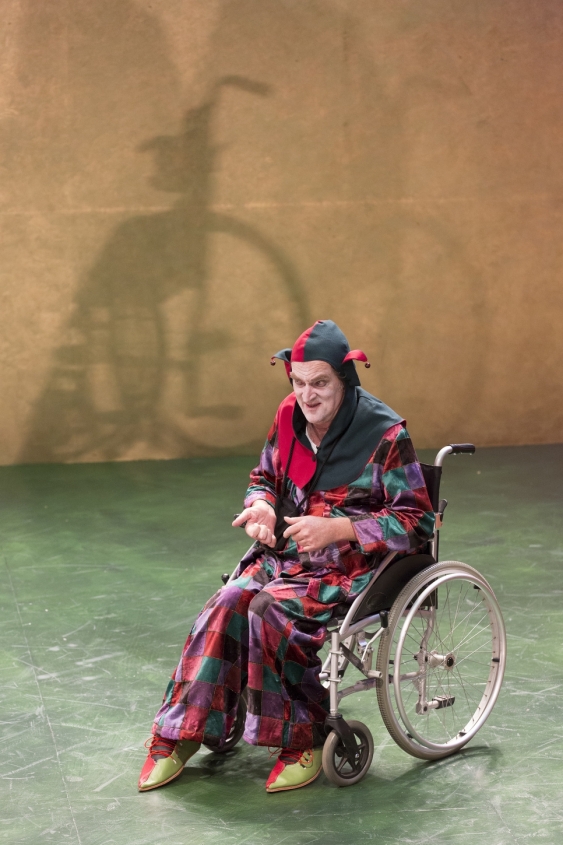 Billed as an example of cross-mobility casting, the veteran actor Keith Robinson brings an additional lense to the ploy of mistaken identity in the work. His arrival as Feste has been prefaced by a ten year recovery from a severely disabling variant of Guillain-Barre Syndrome. His wheelchair choreographics are almost as masterful as his rhythmic and wryly commentative persona. His years of clowning are present in the timbre of his voice alone.

If the fool leads us into the world of the play, then Robinson’s Feste demonstrates both a mastery of form and its undoing. “Nothing that is so is so” he offers at “the very core of our play”. He continues off-script: “But what does that mean? … How does that make you feel?” and after a pause, a wincing reply, “It makes me feel … aggh.”

It’s perhaps ironic that it’s theatre itself which is responsible for those persistent frameworks by which we come to read disability, frameworks which also shape the range of industrial contexts in which disabled actors are able to work.

Performer and disability studies expert Carrie Sandahl explains that audiences are trained “to read disability as a metaphor”, which means that cross-mobility casting (where actors are cast against the physical “type” indicated by a character) rarely occurs.

At the same time, the so-called virtuosity of “cripping up” – where non-disabled actors play disabled characters (as in Dustin Hoffman’s Oscar-winning portrayal of the autistic savant Raymond in Rain Man (1988)) – leaves little space for disabled actors.

The conventions associated with cross-casting are more usually tied to unpacking stereotypical depictions of racial or gender identity. In Australia, as Artistic Director of Griffin Theatre Company Lee Lewis argued in 2007, “aggressive cross-racial casting of the classical repertoire” is desperately needed in order to “dislodge White centrality”.

The same power dynamics are at play in cross-mobility casting, although such practices rarely appear in mainstage productions. Geelong’s Back to Back Theatre have generated enormous international acclaim by placing their expert actors – each of whom hold a range of perceived disabilities – as central to not only staging, but making the work. They take cross-mobility casting even further by foregrounding disabled performers as visionary innovators capable of stunningly disturbing art.

Belvoir’s production is meek by comparison. Costumes gesture towards a Renaissance coding with luxurious velvet gowns of fading reds, greens and oranges. Along with rag-washed walls they create an oddly nostalgic hue that maps the décor of an undecided elsewhere. Perhaps like Viola, we don’t know exactly what country this is or why we might be here.

Count Orsino (Damien Ryan) and Olivia (Anita Hegh) fail to balance the parodic and hysterical tendencies of characters who exist on the edge of what is only just believable. Lucia Mastrantone as the pithy servant Maria brings a convincing physical gestus to her role. Amber McMahon as the buffooning Fabian finds an unaffected agency in the sub-plot. The signature grace and tone of Peter Carroll’s Malvolio locates a complex mix of hubris and vulnerability that brings a much needed, cutting humanity into view.

Aside from the merriment that comes with concealed identities, the gender confusion has a somewhat onerous emphasis on homoerotic punchlines that may have reached their used-by date. Flack’s interpretation offers no additive speculation on the heteronormative corrections played out in the final act.

It also reinserts other hierarchies of difference by casting the arresting vocality of Emele Ugavule, a female performer of Tokelauan and Fijian background, as a ventriloquising voice for Feste’s fooling songs. Is Ugavule inadequate to play the witty fool, or is Robinson, as fool, not “able” to “sing”?

If Robinson’s voice is understudied by another actor who steps in to better play his part, then this version of Feste is not likely an example of cross-mobility casting in its most radical sense. It could be read as yet another reiteration of theatre’s persistent rendition of the disabled performer as fool.

And yet it seems that Robinson’s wounding “aggh”, his wincing meta-theatrical grimace heard at the core of the play, offers one moment where the fool both “does his kinde” and “follows his minde”. This “aghh” might be as much to do with the suffering brought about by an unprecedented illness, as with the space in which he is able to reimagine social agency.

In Robinson’s Feste we are neither given a natural nor an artificial “fool”, but rather one in the spirit of Armin who cunningly charts aspects of both, who wrestles with how it might be “a profit to be foolish”. Perhaps, in another, bolder version, Robinson might even be able to sing.

Twelfth Night or What You Will is playing at the Belvoir St Theatre until 4 September.

Bryoni Trezise is a Senior Lecturer in Theatre and Performance Studies at UNSW.

This article was first published by The Conversation.