Opinion The 2018 childcare package was partly designed to help families work more. But the benefits were too modest to matter

The federal government introduced the current childcare subsidy and activity test in 2018. An evaluation of the policy has found it met some of its intended objectives but failed at others. 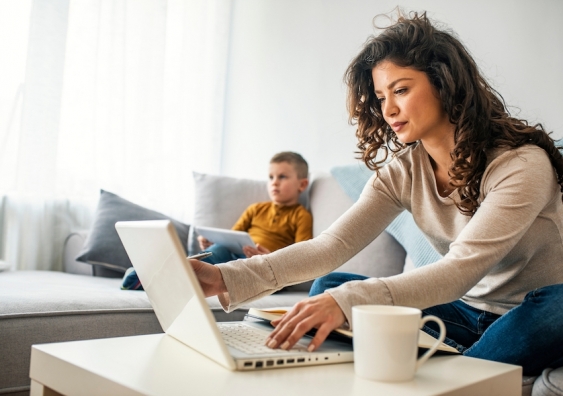 Central to the findings of the evaluation was the larger question of the nature and role of childcare. Photo: Shutterstock.

ensure that taxpayers’ support for child care is targeted to those who depend on child care to work or work additional hours […] [and] align the hours of subsidised care more closely with the combined hours of work, training, study or other recognised activity undertaken.

The package was also intended to control what had been incessant increases in childcare fees.

When initially announced in 2015, then Prime Minister Malcolm Turnbull described the package as “the most significant reform to the early education and care system in 40 years”.

We were members of a team which conducted an evaluation of the package. This was commissioned by the government and included researchers from the Australian Institute of Family Studies, the Australian National University and the Social Policy Research Centre at UNSW Sydney.

The report of the evaluation, released in recent days, found that, while for a majority of families the package had a positive financial benefit, this tended to be relatively modest. And the policy had little impact on longer term costs, access, flexibility or workforce engagement.

The subsidy helped many lower and middle income families

Simon Birmingham said the package was

targeted to those who need it most – low- and middle-income families who are juggling work and parenting responsibilities.

The package introduced a new subsidy structure. For families with incomes of up to $68,163 in 2019-20, the rate of subsidy was 85 per cent of the actual fee or a benchmark price, whichever is lower. The rate of subsidy reduced with income and stopped at $352,453 of total family earnings.

For the subsidy, families had to meet a tighter activity test than in the previous policy. This more closely linked the hours of subsidised childcare to parents’ approved activity such as work and study. In couples the activity level was based on the partner who had the lowest activity.

Parents who did not meet the activity test were still allowed a certain number of subsidised hours per fortnight, but the hours in this new package were lower than under the previously policy.

Our modelling used detailed administrative data. It estimated that, relative to the previous subsidy arrangements, about 686,000 families (62.2 per cent) received more childcare subsidy than they previously would have been entitled to.

But we also identified that costs increased for 323,000 of families (29.2 per cent). The average net costs for these families, who tended to be on higher incomes, increased by $1261. 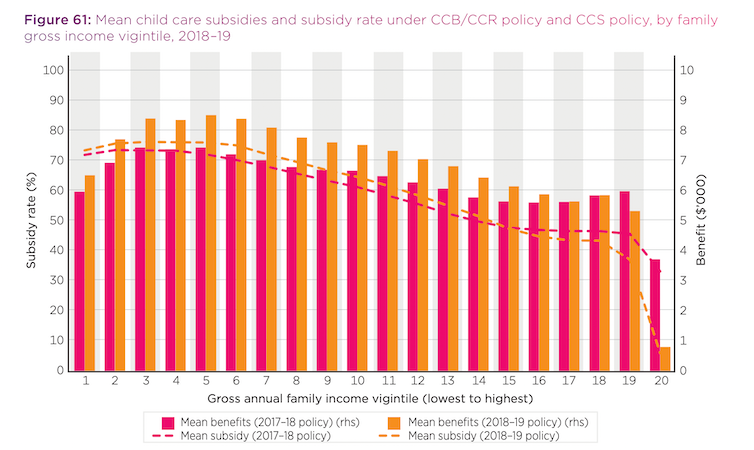 This graph splits families’ incomes into vigintiles, which means 20 groups. The 20th vigintile is the highest earning group, while the first is the lowest. Image: Screen shot/AIFS report

The effect of the new subsidy arrangements varied across family income. The figure above shows the distinct pattern of the largest average increases in subsidy being recorded for the lower to middle income groups, with declines for those on the highest incomes. This reflects the intent of the package.

Families who work more often find they lose much of the extra income they earn due to what is known as an “effective marginal tax rate”. This is where any extra earnings interact with policies including income tax rates, the Medicare levy and the loss of family benefits, combined with the net cost of child care.

Our evaluation found, despite some gains, the effective marginal tax rates on employment still remain high. Families on average incomes see half to almost three quarters of any additional earnings being lost through a combination of reduced transfer payments from government, income tax and the cost of having to use more childcare. 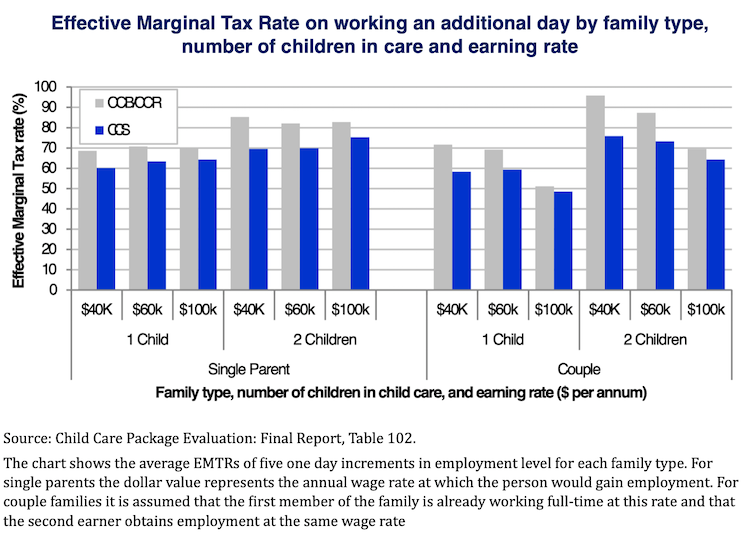 As part of our evaluation we used data from various family surveys commissioned by the education department and conducted by ORIMA Research. Our evaluation found some families reported they had increased their level of employment in response to the package. But most said they had made no change and others said they had decreased employment.

This variation is consistent with economic expectations which see the response as being an interaction of an income and incentive effect. Overall there was a slight balance – some 1.5 –1.9 per cent towards higher participation. But this was consistent with the historical trend of increasing workforce participation by parents.

We found no evidence of the package having reduced the long-term trend towards increasing childcare costs. Its overall impact on childcare costs was relatively small and has already been significantly reduced by rising prices.

Traditionally most child care centres have operated on the basis of charging on a daily basis for a long session of care. The package, including the “allowed hours” under the activity test, was intended to produce more flexible session lengths.

We found while many services did introduce shorter sessions, these were often charged at a higher hourly rate. Frequently the daily fee was the same, or close to that for long session. The more rigid start and finish time of these sessions made provision less, rather than more, flexible.

The reduction in approved hours from 24 hours of care per week to 24 hours per fortnight for those who did not meet the activity test raised some concerns about children losing access to care, or reducing attendance to just one day a week. But we found no evidence of this.

One reason for this was the potentially high proportion of children in this group who were eligible for support through other safety-net mechanisms such as Additional Child Care Subsidy.

Central to the findings of the evaluation was the larger question of the nature and role of childcare. Our evaluation found this had not been addressed in the package.

Rather, the evaluation concluded there was a need for a clear, coherent and comprehensive policy environment for childcare. This needs to link the important goals of the package relating to workforce participation with other policies related to quality of care and the critical role of measures such as universal access to preschool in child development and in preparation for schooling. To achieve this, strategies must also account for the federal and state divisions in responsibility for childcare.

We have options when it comes to regulating recreational cannabis