Although the asylum-seeker problem is highly politicised, it cannot be handled in a political way. Patient work with neighbouring states is the only way to stem the tide, argues Jenny Stewart. 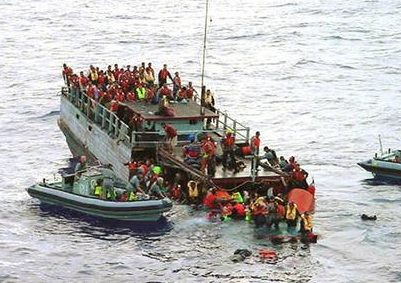 OPINION: Tony Abbott will soon discover that to stop the boats he will have to work closely with our neighbours.

While there are few consolations for no longer being in government, one that will appeal to Labor is that it no longer has to deal with the asylum-seeker problem. It's now up to Tony Abbott to ''stop the boats''. As Labor's perceived failures in this area were Tony's ticket to the Lodge, it's unlikely the electorate will allow him to forget his promise.

Whatever he comes up with, it is unlikely that any specific solution will work for long. This is because the situation itself is constantly changing: the refugee problem reflects the human costs of a world that is increasingly violent and unpredictable. There are not only questions of values at stake. For any Australian government, giving effect to our right to control who comes into the country poses some difficult administrative problems.

Despite the apparent technological sophistication of modern government, in reality we have only relatively crude policy and administrative instruments with which to respond to the needs of millions of desperate people. Most of the time, public administration works by (metaphorically) chopping people up. The state classifies us in order to tax us, pay us pensions, licence us to drive, and enable us to vote.

The problem with classification, of course, is that we human beings are complex creatures who rarely fit into the categories we devise for ourselves. We are also most inventive: we delight in either wriggling into or wriggling out of any specific category, depending upon what is in it for us.

No category is more troubled (or troublesome) than that of refugees. When conflicts break out, civilians are displaced from their homes, winding up either in camps within their original country, or across the border in neighbouring countries. Most of these unfortunate people want just one thing - for the situation to settle down sufficiently for them to return home. Many do return, others - having given up on their homelands - are eventually resettled elsewhere.

In times of global instability, the office of the United Nations High Commissioner for Refugees - the international agency charged with assisting refugees - struggles to meet the demands placed upon it. Cases are resolved at a much slower rate than new cases arise, so the backlog of people in camps increases.

Each conflict produces its own pattern of misery. Many Palestinians have become lifelong refugees, either internally displaced within Israel or the occupied territories, or forced to flee to neighbouring states such as Jordan. Theirs is possibly the saddest story of all. In the years since the Six-Day War, as Israel has entrenched its occupation of Palestinian lands, they have watched their hopes of a true homeland to return to turn to dust.

Somehow, in co-operation with countries prepared to accept them, the UNHCR must create and sustain a humanitarian system that reflects the best the international community can offer. The processes employed must be both humane and effective - and they must also, as far as possible, be fair.

Clearly, the basis for making the assessment as to who qualifies as a refugee is critical. As most people know, the Convention on Refugees defines as a refugee a person who has a well-founded fear of persecution in their country of nationality, on the basis of race, religion, nationality, social group or political beliefs. Given the fragility of some states, a good proportion of their entire population would qualify as refugees.

Ironically, though, many of the people who are most in need are still located in their original countries, because they are not allowed to leave. Some countries are prisons, others (such as Iran) do not allow unsuccessful asylum-seekers to return.

The situation is constantly changing. Afghanistan at the moment is considered to be stable. Were the Taliban to gain control, one would imagine the entire female population would have a reasonable claim to refugee status.

So, where does this leave Australia in relation to asylum seekers? The evidence suggests that if deterrence is cranked up to sufficiently high levels, it is possible to stem the flow of so-called irregular maritime arrivals. But all this tells us is that, if we remove the prize of resettlement in Australia, even the most desperate will give up and stay where they are.

So, in a sea of need, how do we choose? Or rather, when do we stop choosing? Unlike Australia's economically based immigration programs, numbers in the refugee program are capped for any given year. Once the cap looks like being reached, the department can slow the pace at which it processes registered refugees offshore.

The skilled immigration program, on the other hand, is essentially demand-driven, with governments changing the number and kinds of acceptable classifications in order to keep a rough control of the numbers. In times of high economic growth, more people are brought in by employers prepared to sponsor them. When growth falls, so does the demand for labour. The migration intake is therefore adaptive to this degree.

But adaptation is not the only issue. Australian governments know that if the migration program is not seen to be fairly run, it will lose support from those already here. This is why the refugee intake is particularly sensitive.

If asylum-seekers are found to be refugees, they displace others who come through the usual channels. So, do we expand numbers in the intake to accommodate asylum-seekers? This would be one option, but in invoking it, we risk setting up a feedback loop that would quickly overwhelm any nominal cap.

An analogy might be helpful here. In trying to envisage the immigration problem we tend to think in terms of turning a tap on and off. But the reality is much more like a system - a complex one, with many interconnected parts. A system of this kind can be pushed in a certain direction, but ultimately, will tend to push past attempts to control it, as the agents within it modify their behaviour by learning. The Papua New Guinea solution will slow the arrivals, at least for a while. But then a tipping point will be reached.

We won't have much chance of coming up with humane responses if we don't understand a good deal more than we apparently do about the asylum seekers themselves. These are rational people, but the situations in which they find themselves are difficult for many of us to imagine.

Moreover, the people smugglers are more than capable of gauging the likely cumulative impacts of their trade.

The Gillard government policy implemented in mid-2012, for example, which sought to equilibrate asylum-seeker incentives against those of conventional arrivals, was superbly rational. But its rationality was not the rationality of the people smugglers, who could see the advantages that sheer numbers might bring. From a policy-making point of view, it is understanding the nature of the feedback loops that counts.

In a world of increasing flows and porous borders, money moves, goods move, and people move. Common sense suggests that the problem of asylum seekers will be resolved by working on many fronts simultaneously.

Although this is a highly politicised issue, it cannot be handled in a political way. Patient work with neighbouring states is the only way to stem the tide.

Jenny Stewart is a Professor of Public Policy at UNSW Canberra.