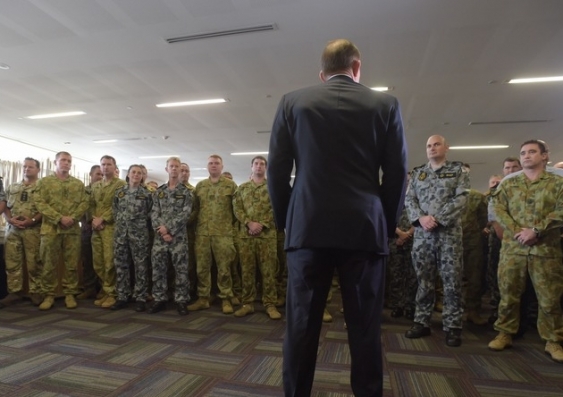 OPINION: The decision by the Federal Government to deliver the Australian Defence Force a pay rise of 2% is another “Captain’s call” by Prime Minister Tony Abbott. This is a policy reversal by the prime minister, following a decision for a 1.5% rise made by the Defence Force Remuneration Tribunal (DFRT) some four months earlier.

Unlike wage negotiations in the public and private sectors, military personnel are not legally entitled to negotiate wage rises or their terms and conditions of employment. Instead, the quantum of proposed wage rises are jointly determined by the Australian government and the ADF and either approved or rejected by the DFRT.

Submissions are prepared and hearings attended by the Defence Force Advocate acting on behalf of the ADF, with the Commonwealth Advocate acting for the employer. Wage rises for the ADF must be affordable and offset by productivity gains, a policy which is consistent with the bargaining policy for the Australian Public Service (APS).

The quantum of the initial pay rise attracted considerable criticism. ADF members labelled it a “disgrace” partly because the pay rise was below the level of inflation. Senator Jacqui Lambie, an ex-ADF member, threatened to block all legislation if ADF members were not given a larger increase. This resistance placed considerable political pressure on the Coalition government to make amendments. In December 2014, the government announced a revised position on the pay deal, which maintained allowances at their current level, effectively eliminating any productivity offsets.

The prime minister’s 2% pay rise plan is subject to ratification by the DFRT. The PM based this decision on the nature of the work of the ADF, namely, that military personnel place themselves in harm’s way in the service of the nation. This statement coincided with the announcement that Australia would send another 300 troops to Iraq. Increasing the pay rise for the ADF by prime ministerial fiat, however, undermines the established process of securing pay rises for the ADF and establishes a worrying unilateral precedent.

Such prime ministerial – or even ministerial – intervention is extremely unusual. In previous APS enterprise agreement negotiations, ministers have been able to intervene to secure pay rises greater than the amount stipulated in policy. In the 2011 APS negotiations, ministerial approval for agencies to provide a pay rise greater than the 3% government imposed cap was granted to only seven of 125 agencies, for “sound business reasons”.

In the current ADF case, the sound business reason appears to be a combination of Abbott’s sudden realisation that the military personnel about to deploy to Iraq will “put their personal safety at risk” and ongoing political pressure, both from Senator Lambie and government backbenchers.

Following Abbott’s announcement, the Community and Public Sector Union (CPSU) called on the government to increase the pay rise for APS employees, who are currently engaged in enterprise bargaining negotiations. In particular, the CPSU is lobbying for an increase greater than the reported 1.05% per annum being offered to Department of Defence employees.

The CPSU is unlikely to be successful in this campaign, however, given it lacks support from the PM, a ministerial champion or a special case for APS employees to be exempt from the government’s bargaining policy.

The pay rise of 2% may bring some limited relief to ADF personnel and their families who were angered by the previous below inflation wage increase offered by the government. But the different pay rises on offer for ADF personnel and Department of Defence employees is likely to increase the wage gap between the two groups and threatens to undermine long-standing efforts to integrate military and civilian personnel. As well as creating divisions within the workforce, the result of the ADF pay deal may do little to stem the numbers of Defence personnel leaving the ADF.

Recruitment and retention has been an ongoing challenge for the ADF in recent years, with reports turnover has increased since 2010. Relatively low pay rises and the likelihood of increased friction between military and non-military staff is unlikely to improve the morale or commitment levels of ADF personnel.

The latest ADF pay rise will also do little to mollify dissatisfied Defence employees, who are preparing to engage in industrial action. The triumph of politics over policy and established process may be a short term expediency on the part of the prime minister, but the longer term consequences of this decision may not be so easily rectified.