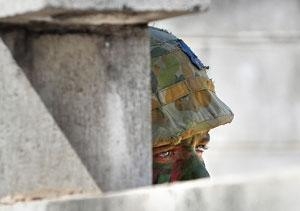 OPINION: The great American soldier-statesman George Marshall believed that if the objectives of a campaign were correctly defined then even a lieutenant - that is, almost anyone - could write the implementing strategy.

The most recent murder of Australian soldiers by a supposed Afghan National Army 'ally' has exposed, yet again, the dissonance that successive Australian governments have allowed to develop between the theory and practice of our national defence policy.

Prime Minister Julia Gillard has continued this regrettable tradition, insisting that the ADF must remain in Afghanistan until 2014 - an entirely arbitrary date chosen by the Americans - to "complete its mission". Foreign Minister Bob Carr, meanwhile, has stated that an early withdrawal would "damage Australia's reputation".

Neither statement has any credibility, neither satisfies General Marshall's objectives/strategy nexus, and both mean that more Australian soldiers are likely to die.

The lowest of these, maintaining the alliance, seems to have taken priority, with successive Coalition and Labor governments eager to despatch our forces to ill-considered US wars which have had no bearing on the defence of Australia.

While an armed attack against Australia presently seems unlikely, failing to prepare for that possibility could lead to an existential threat. That's why the ability to directly defend Australia is the imperative behind our military strategy and, therefore, of our campaign plans and force structure.

The extent to which this imperative has been reflected in practice is questionable, noting our recent wars abroad, but despite the political confusion, the ADF of 2012 has managed to assemble a force structure well-suited to defending Australia.

We should be worried, though, that this fortuitous situation owes more to the vision and persistence of a handful of senior Defence officials - who for four decades have fought against institutional bias and political ineptitude - than it does to any long-term government leadership.

Translating the objective of defending Australia into a credible military strategy requires above all a defence force capable of controlling events in our vast western and northern regions. Thus, the ADF must be able to operate in those regions with superior knowledge, be capable of achieving air and sea control, and, if necessary, of applying coercion.

Most of those capabilities have little relevance to the counterinsurgency warfare on which we have squandered so many lives and so much treasure for 50 years in Vietnam, Iraq, and Afghanistan.

The critical point here is that, in relation to the defence of Australia, the objective, the strategy, and the force structure are complementary.

Regrettably, the same cannot be said in relation to our experience with the objective of supporting the US alliance.

Because of America's utter dominance over both the decision to take military action and the conduct of the subsequent military campaign, the contribution of junior partners participating for policy reasons - as opposed to national self-defence reasons - tends to take the form of 'come as you are'.

In other words, the forces a junior partner provides can be chosen as much for their ready availability, or for their ease of employment in the prevailing circumstances, as for any strategic logic (a blunt critic might use the description 'token' of these contributions).

The inherent risk is that a disconnect can exist between the strategy being pursued by the US and the preferences and capabilities of the junior partners.

That disconnect can become even more pronounced - indeed, highly dangerous - if the US itself does not have a coherent military strategy, a criticism that can be made about the invasions of Vietnam, Iraq, and Afghanistan.

The 'strategy' in Afghanistan, for example, started off in 2001 as part of the so-called 'global war on terror' but, as things have gradually unravelled, has over the course of 10 years changed from expelling the Taliban; to stabilising Afghanistan (whatever that means); and to training and then handing over responsibility to the Afghan army.

It can't be long before the notorious Vietnam-era slogan of 'peace with honour' - code for 'getting out as soon as we can without too much indecent haste' - is wheeled out.

Australians can be proud of the professionalism and stoicism displayed by their Army in Afghanistan. But our soldiers deserve far better.

Dr Alan Stephens is a visiting fellow in the School of Humanities and Social Sciences at UNSW Canberra.

Battle of the Anzac legends