While the historic protest in Kabul was a demonstration of national solidarity against IS-inspired violence, it also reflected disappointment at the poor performance of the national unity government, writes Ali Reza Yunespour. 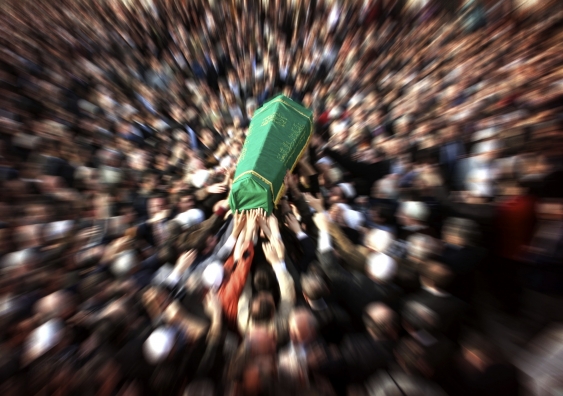 OPINION: The Afghan capital Kabul witnessed a historic protest on Wednesday when tens of thousands of people marched to the presidential palace. It was the largest demonstration in Afghanistan’s modern history. Demonstrators carried the coffins and photos of seven innocent people – including two women and a nine-year-old girl – whose bodies were found on Saturday.

Afghan officials reportedly said Islamic State (IS) had kidnapped these ethnic Hazara people several months ago and held them in the Arghandab district of southern Zabul province. While serious questions remain about the circumstances of the kidnapping and killings, the captives had been brutally beheaded just days ago. Their bodies were sent to their families in the Jaghori district of Ghazni province.

In a marked sign of respect, national security forces allowed protesters to move freely around the square in front of the palace. The demonstration was largely peaceful, except when guards opened fire on protesters who tried to breach the palace gate. A presidential spokesperson said ten protesters were wounded.

The protest had been looming for a long time. At one level, it was a demonstration of national solidarity against violence and terrorism. Amid increasing insecurity, highlighted by the fall of the provincial centre Kunduz to the Taliban, the demonstrators chanted in support of Afghanistan’s shaky political system.

At the same time, reflecting anger and disappointment with the poor and discriminatory performance of the national unity government, the protesters called on the international community to continue supporting the Afghan people’s struggle against violence.

Goal is not to overthrow the system

Street protests and uprisings are not new for the people of Afghanistan. In the 1960s and 1970s, Kabul University students protested and overthrew the king, ending over two centuries of rule by the monarchy. In the 1980s, the Mujahideens’ violent uprisings caused the fall of the Soviet-backed government, followed by a brutal civil war in Kabul in the 1990s.

First, the pace of political reform failed to match the public’s desire for change, resulting in chaos and disorder. As political scientist Samuel Huntington has said:

[Social disorder] is the product of rapid social change and the rapid mobilisation of new groups into politics coupled with the slow development of political institutions.

Second, the target of the protests and uprisings was the political system of the time. However, on Wednesday, the demonstrators chanted in support of the nascent political system, a mark of its strong legitimacy among a majority of the Afghan people.

In another significant development, the protesters came from all walks of life and included men and women and all ethnic groups of the country: Pashtuns, Tajiks, Hazaras, Uzbeks and other minority groups. They emphasised national solidarity over their ethnic and sectarian differences.

Their demand goes beyond the safety of the Hazaras and they want justice for all Afghans regardless of their ethnicity, sect and location.

On the same day, people in Zabul province, mainly from the Pashtun ethnic group, organised a separate protest in support of the victims’ families and the demonstration in Kabul.

These developments reflect significant social and political changes in Afghanistan over the past decade. Among other things, it has a widely legitimate constitution and national security force.

In 2014, from a very low enrolment base in 2001, around eight million students attended schools. About 250,000 students, including 20% women, were enrolled in 144 higher education institutions.

Today, the internet, mobile phones and other media connect Afghans to the outside world more than ever before. Facebook users played the leading role in the organisation and coverage of Wednesday’s demonstration. Some local TV stations provided live broadcasts.

Leaders get a wake-up call

These protests should serve as a wake-up call for government leaders to work more for the security of the people. To do so, they must put aside personal and political differences. As a first step, more than a year after the national unity government took office, they should work together to appoint a defence minister.

As he promised justice, President Ashraf Ghani and his political allies need to review the past year’s security policies and demonstrate greater political will in fighting the Taliban and other insurgent groups. After the fall of Kunduz and previous killings in Jalriz, Ghor and Badakhshan, which were similar to the latest beheadings, military support from Kabul arrived too late or did not arrive at all.

Poor logistical organisation and widespread corruption no doubt played a role. However, concern is growing about the true intent and the political will of Ghani and his security advisers in fighting the Taliban, as they all belong to the same ethnic group.

Finally, the protests are a call for continued support from other nations, including Australia. It is promising that General John Campbell, commander of the NATO-led force in Afghanistan, called on Wednesday for national unity in Afghanistan and reiterated the commitments of the United States and other NATO governments to the “peace process” with the Taliban.

In reality, the “peace process” is in limbo. This is because of infighting among Taliban factions and political differences between Afghanistan and neighbouring Pakistan, which supported the Taliban in the past.

As such, Afghans are demanding a clearer policy by their government and the international community towards the Taliban and other insurgent groups which continue to murder civilians. In particular, Australia should add the Taliban factions to its listed terrorist organisations.

Otherwise, ongoing insecurity, extreme poverty and poor governance threaten to destroy the legitimacy of the shaky political system and, with it, Afghanistan’s future as a country.

Ali Reza Yunespour is a PhD candidate in International and Political Studies in UNSW's School of Humanities and Social Sciences.