Indigenous knowledge can offer new solutions to lowering the numbers of Aboriginal children in welfare, according to an international expert speaking at UNSW. 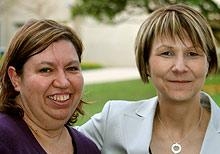 More attention needs to be paid to Indigenous wisdom if the over representation of Indigenous children in the Australian welfare system is to be corrected, a visiting international expert has told a UNSW audience.

Executive Director of the First Nations Child and Family Caring Society of Canada and member of the Gitskan Nation, Blackstock delivered a powerful address about the value of Indigenous knowledge in helping child welfare systems respond to structural risk factors like poverty and social exclusion.

Blackstock believes the increasing incidence of Indigenous children in welfare is a predictable outcome of the system that Western governments have created.

"Government interventions are often limited to family based programs that don't deal with the source of the risk which is based at a societal or government level," said Blackstock.

"Government can always provide enough funding to remove children from their families but never enough to keep them there."

"Aboriginal children aren't always in care because of poor or bad parenting, but because of the lack of understanding of the structural problems that Aboriginal communities face," she said.

Blackstock believes there are few theoretical Western models that go beyond describing structural risk to actually dealing with it. In response she has proposed a new theory based on principles that have been practiced in many Indigenous cultures for millennia.

"Indigenous knowledge is based on ancestral narratives that are passed down through generations. It has a holistic approach and focuses on attention to basic values and principles of human behaviour like self actualisation, identity and belonging," said Blackstock.

"This isn't about focusing on the inequalities between Indigenous and non-Indigenous peoples. The question should be, 'Do we believe that every child's life is valuable?'"