An article arguing that deaf people should be allowed to serve as jurors has been awarded the inaugural Andrea Durbach Award for Human Rights Scholarship at UNSW. 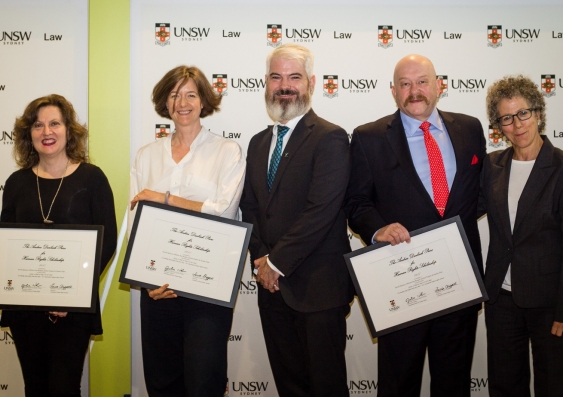 A research article arguing that deaf people should be allowed to serve as jurors has been awarded the inaugural Andrea Durbach Award for Human Rights Scholarship.

The article, “Justice is blind as long as it isn’t deaf: excluding deaf people from jury duty – an Australian human rights breach”, was published in the Australian Journal of Human Rights and was inspired by detailed research and by the thousands of deaf people in Australia who are denied the right to perform their civic duty.

The article was written by Professor David Spencer, from the Australian Catholic University, Mehera San Roque, from UNSW, Professor Jemina Napier, from Heriot-Watt University in the UK, and Professor Sandra Hale, UNSW.

Professors Spencer and Napier had launched a research project where they examined whether deaf people could comprehend complex jury instructions from a judge in a courtroom through a sign language interpreter to the same degree as hearing people who listened directly in English. They found that deaf people are not disadvantaged by accessing the information through an interpreter.

This project included a mock trial where real lawyers, serving police and actors re-enacted an actual trial that had previously taken place. The researchers observed how a deaf juror participated in the trial with two professional Auslan interpreters in the courtroom and how all the jurors deliberated on the case in the jury room before delivering their verdict. All the participants were interviewed after the trail and jury deliberation to ascertain their perceptions of the impact of the deaf juror on the case.

The study found that professional interpreters do not interfere with the deliberations in the way that it was feared. The hearing jurors all agreed that they were able to communicate successfully in the deliberation room through the interpreters. The research argues that deaf people can serve on a jury without compromising proceedings.

The Australian Journal of Human Rights article outlined the research findings and stated that if deaf people are not offered the opportunity to serve as jury members, it would be a breach of their human rights.

“This research project is the first to study the effect of interpreters in the jury room, and it has also shown that competent and ethical Auslan interpreters can place deaf people in the same position as hearing people, allowing them to participate fully as jurors in a trial.” 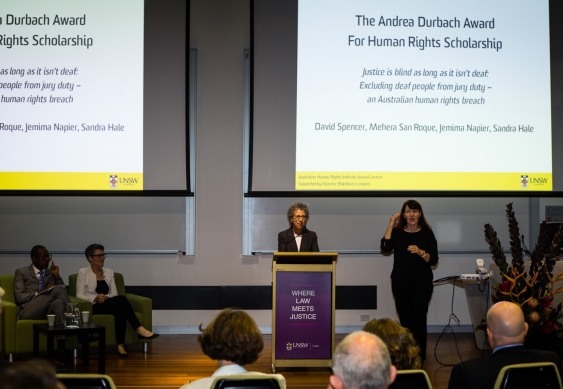 Professor Spencer, a former lawyer who is now with the Faculty of Law and Business at ACU, said: “The research has consistently proven the only barrier to equal rights in this area is the political will to make it so.

“While many hearing people try and evade jury duty, for deaf people it is one more brick in the wall of discrimination that they must contend with every day of their lives.

“We call on federal and state governments to amend the respective jury Acts to put an end to this discriminatory practice.”

In the USA, deaf people have been serving as jurors in various states since 1979.

Professor Napier said: “We are very proud to receive this award. The Australian Journal of Human Rights article has played an important role in advocating for the human rights of deaf people.

“We have worked together with Deaf Australia and the World Federation of the Deaf to promote the impact of this research and have donated the award prize money to Deaf Australia’s fundraising website, Jury Rights for All, which seeks to raise money to fund the campaign to allow deaf and disabled people to participate as jury members.

“We hope the donation will support their work. We also hope this Australian research will have wider impacts for those other countries which also do not allow deaf people to serve as jurors, for example, the United Kingdom.”

“The real importance of human rights research and advocacy is that it gives visibility to an issue that has been ignored or hidden and is crying out for acknowledgment and action,” said Professor Durbach, from UNSW’s Faculty of Law.

“At a certain point in the cycle of this work, often after years of advocacy and an acute aligning of forces, the issue finally demands national and, sometimes, global attention. That was the striking feature of the article, as was its clear potential for instigating change.”

The award was presented at the Australian Human Rights Institute Annual Lecture, at UNSW Sydney on Thursday night.

The article in the Australian Journal of Human Rights is free to access until April 30.

UNSW academics honoured by Australian Academy of the Humanities