ASPC: Reviving empathy and universalism in times of austerity

A new authoritarian moralism has taken hold as a result of global economic transformation, according to the University of London's Guy Standing, who will be a key speaker at UNSW's Australian Social Policy Conference next week. 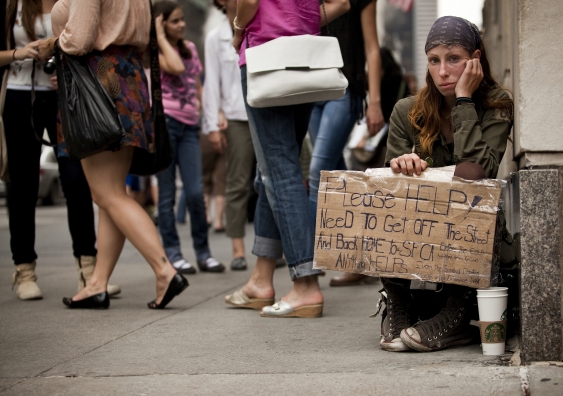 “The utilitarian politics of the era has ... involved an erosion of that vital human sentiment of compassion and empathy.” A homeless woman in New York City. Photo: iStock

A new authoritarian moralism has taken hold as a result of global economic transformation, according to Professor Guy Standing, who will give a keynote address the Australian Social Policy Conference (ASPC) at UNSW next week (28-30 September).

Guy Standing, who is Professor of Development Studies at the School of Oriental and Asian Studies, University of London, will argue the neo-liberal economic approach widely implemented since the 1980s has resulted in the erosion of rights of a growing class of people who lead increasingly insecure lives: the ‘precariat’.

“The utilitarian politics of the era has resulted in a regressive social policy mix of means-testing, behaviour testing and workfare.”

“The utilitarian politics of the era has resulted in a regressive social policy mix of means-testing, behaviour testing and workfare,” Professor Standing will argue. “This has taken hold at the expense of social solidity, whittling away at the public commons and eroding all forms of rights for the precariat.

“Above all, it has involved an erosion of that vital human sentiment of compassion and empathy,” he will tell the audience at the country’s pre-eminent conference on social policy, which is hosted by UNSW’s Social Policy Research Centre (SPRC). The theme of the biennial event is Rights and Entitlements in Times of Austerity.

Practitioners, policy makers and cross-disciplinary researchers from Australia and overseas will address the theme across a range of issues including domestic and family violence, childcare choices, pensions and youth unemployment.

“Austerity could potentially force the development of new ways to harness social resources to address poverty, marginalisation and exclusion,” says SPRC Director, Professor Lyn Craig. “So it’s important to learn from others’ experience in addressing how to maintain rights and entitlements in the face of this global shift.”

Other conference keynote speakers are: Robert Manne, Vice-Chancellor’s Fellow and Convenor of The Ideas & Society Program at La Trobe University and; Jane Waldfogel, the Compton Foundation Centennial Professor of social work and public affairs at Columbia University, who is currently a visiting professor at the London School of Economics.  Emeritus Professor Manne will speak on “Climate change: crisis for humankind; crisis for the social sciences”, while Professor Waldfogel will address the topic “Understanding and reducing inequalities in child development”.

Each day of the conference will conclude with a panel discussion moderated by the ABC's Richard Aedy.

Also during the conference, the Australian Bureau of Statistics will report on its new initiative, Transforming People Statistics, which will deliver enhancements to the breadth, timeliness, and depth of population and social statistics and how they are delivered.

A gentle invasion: women in the workforce