The 16th Australian Social Policy Conference held this week at UNSW Sydney was a space for deep and critical thinking about some of society's major challenges. 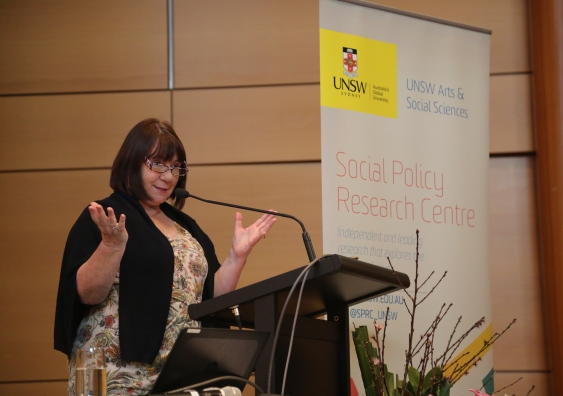 If someone with an economics background approached Jill Manthorpe for a job in her Social Care Workforce Research Unit at King’s College London, she would welcome them with open arms. In an era when consumers have increasing control over their own care services but government budgets remain under pressure, social workers need to be financially literate now more than ever, says Professor Manthorpe.

Manthorpe researches social care workers, one of the largest groups of workers in the UK. Increasingly, she says, social policy studies are linking money with new social problems – everything from gambling and cybercrime to financial abuse of the elderly and the use of slave labour across supply chains.

Manthorpe’s address – one of five keynote presentations delivered over three days – attracted a large audience on the final day of the biennial conference. Hosted by UNSW’s Social Policy Research Centre (SPRC), the conference brought together over 300 leading national and international researchers, practitioners and policy makers with a view to influencing debate and practice.

The conference was a space for deep and critical thinking about the major challenges in society, says SPRC Acting Director Carla Treloar.

“The plenary speakers provided some rich ideas for conference delegates to consider,” Treloar says. “And the conference was abuzz with networking as we continue to work together for a just and more equitable society.”

The conference attracted strong media interest. Professor of Criminology in UNSW Arts & Social Sciences Chris Cunneen was interviewed by print, digital and radio journalists nationwide about his call to raise the minimum age of criminal responsibility to at least 14 from its current level of 10.

Increasing the minimum age has the potential to reduce the likelihood of children experiencing lifelong contact with the criminal justice system, Cunneen told the conference.

“It is well established that one of the key risk factors for criminal justice contact, is prior contact," he says.

University of Queensland’s Professor Greg Marston, who delivered the conference’s opening address, told Sky News he wanted Australia to join other nations in debating the merits of introducing a universal basic income to help with an expected surge in unemployment that the rise of robots may bring.

In his plenary address, Marston said automation and advanced artificial intelligence raised profound social, economic and ethical questions about the meaning of work and humanity, the role of governments in managing new risks, the purpose of education systems, and what values and principles would define the ‘good society’ of the future.

"If the transition is managed well, there will be an opportunity to recalibrate the centrality of paid work in our lives. If it is managed poorly, the cost will be widespread technological unemployment and greater inequality and economic insecurity.”