Opinion Attacks on Ukraine's hospitals are deliberate and brutal. The world must respond to these acts of terror

We need to document and investigate these attacks, including testimonies from health workers, if we are ever to see these war crimes prosecuted. 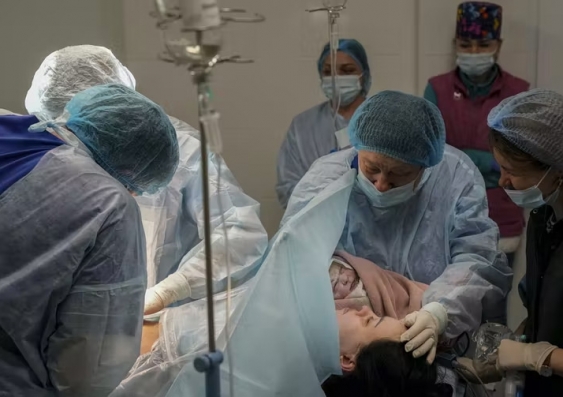 Reports earlier this week of Russian attacks and siege of a major hospital in the Ukraine city of Mariupol indicate a particularly bleak and dark phase of the war.

Sergei Orlov, the city’s deputy mayor, told the BBC how Russian forces had entered the building, preventing doctors and nurses from leaving. About 400 people had been effectively taken as “hostages”.

Health workers, operating from the basement of the hospital, were apparently trying to provide health services despite the dire situation.

This comes after attacks on a maternity hospital in the same city the previous week.

While these examples made headlines around the world, there have been many more attacks on health facilities and health workers since the start of the war.

The World Health Organization records 44 attacks on health facilities, health supplies, health workers or patients in Ukraine. Of those, 34 attacks have impacted health facilities. Violence with heavy weapons as well as abduction, arrest or detention of health staff are recorded. The list updates as more reports come in.

The effects of such attacks go far beyond the tragic loss of life. Destroyed infrastructure, inability to refer to other health facilities, diminished access to technology, equipment and drugs, and lack of power or fuel for generators affect how hospitals function under such circumstances.

Such attacks also undermine the morale of health professionals and community members. They deter people who need health care from accessing remaining services. People may feel unsafe leaving bomb shelters to seek care if hospitals become targets or are insecure.

These attacks are deliberate

Despite the legal protections afforded to health facilities in wartime under international law, we continue to see such attacks in many conflicts including Yemen, Syria, Afghanistan, Bosnia and Myanmar.

Given the sophistication of modern weaponry and laser-guided munitions, there are few who believe attacks on such facilities are “accidental”. Rather, history shows us they are part of a strategy of war and aim to achieve certain objectives.

Read more: As the Ukraine war drags on, how secure will Putin’s hold on power remain?

In his book Killing Civilians: Method, Madness and Morality in War, UK academic and policy advisor Hugo Slim explores why parties to conflict might resort to such tactics.

He says this includes attempts to annihilate certain groups, efforts to demonstrate extreme power and to dominate and subjugate others, and/or to inflict revenge and collective punishment.

In some cases, he says such ruthlessness is strategic or tactical. Terror and atrocity magnify a party’s power and control. It also undermines the public’s morale, and trust in the reliability and safety of health services.

Australian academic Michael Humphrey, in his book The Politics of Atrocity and Reconciliation: From Terror to Trauma, says those who seek to terrify are willing to go to extremes to achieve their objectives, even if they may be committing war crimes.

This is what health workers face

Health workers in Ukraine are members of families and communities; they experience what the community experiences, but have additional stressors.

They are under pressure to serve their communities under physically and psychologically challenging circumstances. They are driven to provide care to those who need it; this may even include wounded enemy personnel.

This pressure mounts over extended periods of conflict, sieges and deteriorating conditions, exerting a heavy toll.

In situations of ongoing brutality and violence, morale will be undermined given the inability to deliver the quality of care they know is required and in normal circumstances they could deliver.

Exhaustion, lack of materials and back-up support, distress among colleagues and overwhelming needs will take a toll on even the strongest and most positive professionals.

How do we help?

First, these attacks must stop.

We also need to provide health workers with psychological and moral support. Where available, communication technologies from Zoom to WhatsApp would enable health workers access to skilled advisors and health consultants to help manage difficult conditions or resolve dilemmas.

Appreciating the importance of mental health care and self-care ought to be reinforced and supported. Strategies to reduce stress, get rest and debrief with colleagues will play a part. COVID has shown the importance of supporting health care workers this way. These challenges are intensified in periods of conflict.

Health workers need extra supplies of medicines and medical equipment, personal protective equipment, power generators and sterilisation equipment. Countries of the European Union, and other supportive authorities operating through the United Nations and non-government organisations, can help provide these when there are lulls in the conflict.

We must document health workers’ stories and challenges. Efforts by the World Health Organization, International Committee of the Red Cross, a range of human rights organisations (such as Physicians for Human Rights and Human Rights Watch), researchers and academics can play a valuable role in documenting in real time the impact of conflict and violence on health, health personnel and health care.

Key will be prosecuting war crimes and crimes against humanity – for which detailed evidence and documentation will be required.

We also need independent, robust and transparent investigations into attacks on hospitals to facilitate such prosecutions. Trusted health agencies, human rights organisations, and health researchers in and outside Ukraine should assist.