Australia's university sector is one of the most attractive for international students. So why not try to keep them when they graduate rather than lose the talent we've helped train and educate? 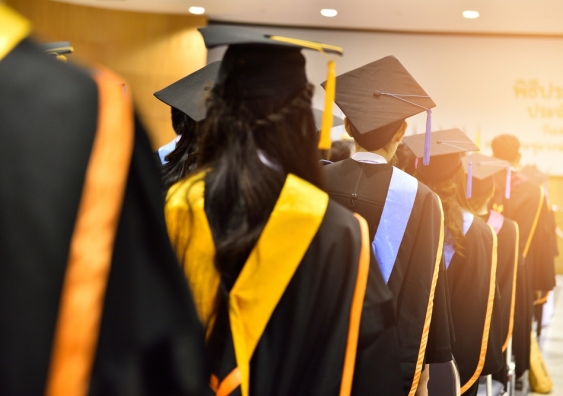 Australia’s education system takes almost one in ten of all international students from countries that are members of the Organisation for Economic Co-operation and Development (OECD).

That’s according to thes latest Education at a Glance report from the OECD.

But Australia should do more to retain some of those students after graduation or it risks losing good talent overseas.

A degree of talent

The OECD report says Australia’s higher education sector is heavily reliant on international students. They represent about 48% of those enrolled in masters and 32% in doctoral programs.

This is partly due to a lack of interest among Australians in pursuing higher-degree study compared to other countries, about 10% in Australia versus 15% across OECD countries.

Australian students are not choosing some STEM (science, technology, engineering and mathematics) subjects as much as those in other OECD countries. For example, only 17% of adults (aged 25 to 64) with a tertiary degree had studied engineering, manufacturing and construction.

This trend appears to be getting worse because the proportion of new students entering STEM-related bachelor degree programs is lower in Australia (21%), compared to 27% across OECD and partner countries.

While the government here provides for up to four years of post-higher-degree stay for international students, it is inevitable that Australia faces a drain of foreign-born specialists who were educated in Australia.

In 2017, the Australian government granted permanent visas to only 4% of foreign students and temporary graduate visas to only 16% to live in Australia after completing their study. It is obvious then that many international students return home after they study in Australia.

What can the Australian government do?

We need to provide better incentives for those who complete a higher-degree program, especially in the STEM areas, to stay on in Australia.

The OECD’s report says people who studied information and communication technologies (ICT) and engineering as well as construction and manufacturing will continue to benefit greatly from strong labour-market opportunities everywhere in the world.

Australia can do better in attracting younger generations to be trained in the STEM area at higher-degree levels. We then need to try to retain more of the foreign-born higher-degree holders rather than sending them back home.

Being afraid of an influx of Chinese or Indian students who will contribute to development of innovation and technological changes in this country should become a thing of the past.

The Education at a Glance program aims to give an annual snapshot of the effectiveness of educational systems – from early childhood to doctoral level – across all OECD and partner countries.

At almost 500 pages, the 2019 report does contain some good news for Australia.

Australia spends a higher proportion of its GDP (based on public, private and international sources) on education, 5.8% compared to the OECD average of 5.0%.

When it comes to people going on to further studies, the proportion of tertiary-educated Australians has increased over the past ten years. It is now 51%, compared to the OECD average of 44%.

Australian young adults with vocational qualifications have a higher employment rate (83%) than the OECD average (80%).

Although earning power is still greater for those with a higher level of educational attainment, the financial return from more schooling is far smaller in Australia.

The OECD attributes this trend partially to good labour-market opportunities for those with upper secondary vocational qualifications.

The OECD also notes that the average employment rate for Australian tertiary-educated adults is 85%, only two percentage points higher than the 83% for those with a vocational upper secondary or post-secondary non-tertiary qualification.

This is one of the smallest differences across OECD countries.

Jihyun Lee, Associate Professor of Educational Assessment and Measurement at the School of Education, UNSW

Evidence for success of independent public schools is flawed

Too many school students are over-confident