Opinion Australia's bid for Security Council is good for democracy

My hope tomorrow is that if Australia is successful in rejoining the Security Council, it will help to reinvigorate the UN's global efforts to promote human rights for all, writes Jose-Ramos Horta. 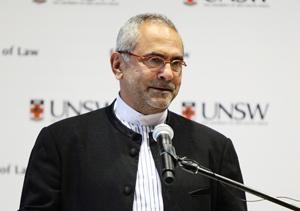 OPINION: This is a time of remarkable change in the world and in this region. The Arab Spring, the conflict in Syria, as well as matters closer to home, the changes in Burma, the shift in economic and political balance in what is being dubbed the ''Asian Century''. And tomorrow's vote for Australia to become a potential member of the United Nations Security Council.

I know firsthand the importance of Australia's role in supporting democracy and addressing poverty in my country, Timor-Leste. I see the valuable work many small Australian NGOs and people do to support those individuals and organisations working on the human rights frontline across the world.

Visiting Australia again this week, I visited the diplomacy training program that I helped establish more than 20 years ago at the University of NSW. I was reminded what a remarkable country Australia is - and also of its complex relationships with the region that it shares.

Timor-Leste has experienced some of the good and bad of these relationships, the generosity of the Australian people, their commitment to the values of democracy and human rights, but also the damage that can be done when relationships are governed by too narrow a view of national self-interest - strategic or economic.

I established the diplomacy training program in 1989 with a small grant from the Evatt Foundation and coined the term "peoples' diplomacy" to describe its work of linking people in this diverse region who had a common commitment to supporting the values of human rights and human dignity.

I dreamt then that Timor-Leste could regain its independence. I could not imagine that the Indonesia of Suharto could become an Indonesia that is now one of the leading voices for human rights in the Association of South-East Asian Nations, a vibrant democracy that has been pressing for a stronger ASEAN Declaration on Human Rights.

Change has been slower to come to Burma. However, the release of my fellow Nobel peace laureate Aung San Suu Kyi after so many years of house arrest gives real hope of substantive and sustainable change. No one could discount the role of the human rights defenders, of the civil society advocates and their organisation in achieving these changes.

I am proud that alumni of the diplomacy training program have been a part of these developments. In the process bonds of solidarity between Australians, particularly indigenous Australians, and people in the region have been built. Alumni of this NGO have been part of the processes of seeking peace and reconciliation in Mindanao, Thailand and Nepal.

I know from my own experience in Timor-Leste that independence, emerging from a time of serious human rights violations and shifting from authoritarian rule to democracy brings its own challenges.

While regime change, as we have seen in the Arab Spring, can be rapid, the challenge of building democratic societies that respect the rights of their minorities and the aspirations of their people for human rights, economic and social, civil and political, takes time and long-term support.

These countries in the Middle East require support to build the institutions of government, but also in building the strength of independent civil society that has the capacity to hold governments to account.

Unless these governments can effectively address poverty, their legitimacy will be undermined and political instability will be associated with the rise of extreme views and intolerance. It is a truism that democracies do not go to war with each other, and as Harvard Professor Amartya Sen has highlighted, democracies do not have famines.

Helping to build effective and strong civil society over the long term offers the hope that we can in future avoid the tragedy of the conflict now taking place in Syria.

This brings me back to Australia's engagement with the region - and the need to recognise that the values of human rights are shared as much by the people of this region as they are across the world. Supporting aspirations for human rights, and the individuals and organisations that promote these values, will contribute to Australia's own peace and security in the long term.

Australian civil society is a key part of the country's engagement with the region and world, building the store of goodwill that exists for Australians everywhere. My hope tomorrow is that if Australia is successful in rejoining the Security Council, it will help to reinvigorate the UN's global efforts to promote human rights for all - its original promise.

The Diplomacy Training Program at UNSW was co-founded in 1989 by Jose Ramos-Horta, a Nobel peace laureate and the former president of Timor-Leste.