Opinion Battle of the Anzac legends

Is it time for a truce between proponents of the differing perspectives of the Anzac legend, asks military historian Craig Stockings. 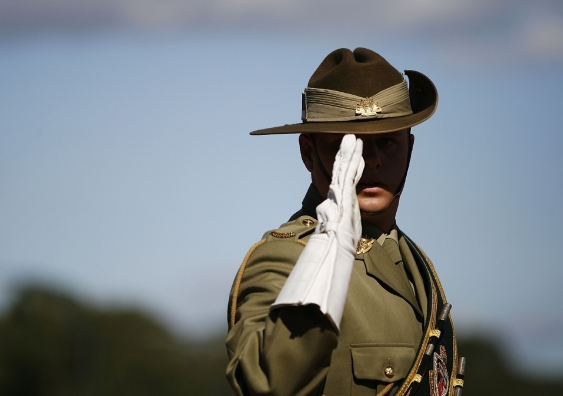 OPINION: When I published a book about the Battle of Bardia, fought in North Africa between Australian and Italian troops in January 1941, I received a letter saying I was slighting the Anzac legend and spent too much time with "trendy lefties and feminist lesbians".

"Take a break and just be proud Craig, because those old fellas fought for your right to deny their achievements," the writer said.

As a military historian I know the power of Anzac.

The legend has been a powerful and pervasive force within Australian social and cultural life for almost a century. If anything, as the last Australians with first-hand knowledge of Gallipoli have passed, Anzac imagery and sentimentality has grown stronger.

Whether we consciously recognise it or not, Australians grow up feeding on an overt and subliminal diet of Anzac. Its powerful symbolism permeates all aspects of our community life. School curriculums teach as much of the Anzac mythology as they do of the kernels of historical fact on which the legend is built.

For decades, the legend has been enthusiastically advocated by veterans' associations claiming to represent the body (and spirit) of the men at its heart.

We are reminded relentlessly of the signs, ceremonies and liturgies of Anzac on April 25 each year at various shrines, large and small, across the length and breadth of the country.

"Anzac" is sufficiently sacrosanct as to be legally protected under the Protection of the Word Anzac Act of 1920. Importantly, from 1915 this national foundation myth has influenced and skewed public understanding of military and historical reality. Today, it continues to prompt popular interpretations of real historical events that may only have a tenuous connection to fact.

Yet how many of us are aware that, for a variety of reasons, a significant proportion of the soldiers, on returning from World War I, chose never to march?

Much of the power of Anzac stems from its idealised representation of the values most of us aspire to, or even imagine we possess, simply by being Australian.

The model of Anzac manhood is physically commanding, mentally stoic, yet mercurial in spirit. In war he fights hard but plays by the rules. He is ready to volunteer in a good cause but has no desire to kill. Yet he will do his terrible duty by his nation and his mates. He may be a little uncultured around the edges but he has an innate sense of fair play and deep democratic urges. He is no conscript, for compulsion is too close to reluctance.

Where he has erred, his mistakes are not really his. They belong, by and large, to his incompetent (British) military and political leaders. He may be uneducated and unruly, but he is nonetheless clever and endlessly resourceful. Perhaps he had to be, coming from the bush. He is every inch the man -- "he" cannot comfortably be a "she" -- despite the degree to which the legend is often stretched in an attempt to make such an accommodation. He is always, always white.

In my experience the average Australian has a general if intangible impression -- a vague feeling -- that not only have Australian troops achieved incredible feats of arms, but they were able to do so, at some level, thanks to the fact Australians are somehow "naturally superior" soldiers.

Any historian working in the field recognises such sentiment as nonsense rooted in myth, not evidence. Ethnicity has never been an explanation of battlefield outcomes. Australian soldiers have always been, and are still, ordinary men and women put in extraordinary circumstances. Their place of birth, or nationality, is not connected to their military prowess. The roots of their success, and their failures, have nothing to do with hazy conceptions of national character or ethnic inheritance. Being an Australian is of no consequence to their behaviour under fire, what they achieved, or what they failed to accomplish.

Australian troops, even in the context of their proudest and most significant achievements at such famous places as Kokoda, were effective thanks to their training, supply and leadership. They were made into soldiers, not born into Anzac.

The irony here is that acknowledging such facts -- that Australian soldiers were mere humans with human failings, weaknesses and fallibilities -- increases the magnitude of their achievements.

It is one thing for indomitable bronzed Anzac supermen to have swept all before them on various battlefields, but quite another for such feats to have been accomplished by Australians like you and me -- normal people in the most testing of circumstances.

This nuance was lost, it appears, on my letter-writer. Yet ideas to the contrary remain entrenched, because at its heart historical understanding in this country is intertwined with the social and psychological implications of the Anzac legend.

One down side is that those who fail to fit the Anzac mould, or celebrate it, run the risk of seeming un-Australian. A number of academically oriented historians are so labelled, me included, despite the khaki uniform I once wore or the personal values I hold dear. Some wear the badge of "traitor" with pride. Others try to avoid taking sides.

So what is to be done? Perhaps, on Anzac Day of all days, it is time to stop, reflect and catch a breath. Perhaps let's take some inspiration from US evolutionary biologist and historian of science Stephen Jay Gould, who proposed that the conflict between science and religion was unnecessary, because each should be considered two distinct fields whose authorities do not overlap. Each serves different roles, fills different needs and provides varying degrees of succour to different people.

It could be a similar case for military historians and Anzac devotees. The purposes of each are quite opposed, as are the motivations in many cases, and the methods. Why, however, must the two be mutually exclusive?

Is it time for a truce?