Opinion Bombings in Iraq a sign of deep domestic problems

Continuing bomb attacks in Iraq show sectarian tensions have not been resolved in the wake of the US military withdrawal and could be a portent of more upheaval to come, warns Dr Anthony Billingsley. 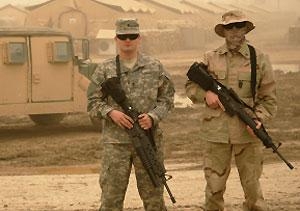 OPINION: When US President Obama announced the end of America’s involvement in Iraq, he deliberately did not claim victory. But he did say, when welcoming the last contingent of combat troops home in October last year, that the war in Iraq was over. For Americans, Australians and the media in both countries, that may be how the situation is seen. Iraqis could be excused for disagreeing.

For some months now, Iraq has been experiencing a steady campaign of bombings and murders across the country. Iraqi security forces have been hard-pressed to deal with the attacks, especially since the departure of US forces.

The campaign has been directed largely at the Shi'a majority and, while the identity of the attackers and their motives can only be guessed at, it would seem that their intent is to demonstrate that the government of Nuri Al-Maliki is incapable of providing security and services for the population.The campaign of violence has been provoked by two factors: provocative actions by Prime Minister Al-Maliki and the impending meeting of the Arab League in Baghdad. The situation has been aggravated by the descent into violence in Syria and rivalry between Saudi Arabia and Iran, which is being fought out in Iraq. This is a fertile environment for people who are intent on causing disruption.

Al-Maliki – consolidating Shi'a power
The focus on Shi'a targets, such as the city of Karbala, suggest that those behind the attacks are Sunni. It is also notable that the campaign achieved prominence following a series of measures by Prime Minister Al-Maliki which seem designed to drive out Sunni members of his coalition government and exclude the Sunni from power.

Last December, Al-Maliki issued an arrest warrant for Tariq Al-Hashemi, the country’s Vice-President, on charges of having organised death squads.

This action, and moves against other Sunni politicians, has created an atmosphere of crisis, which invites the rise of sectarian tensions in a volatile country.

The Arab League Summit and the Saudi connection
The meeting of the Arab League later this month will be the first held in Iraq since 1990. It represents significant progress in Iraq’s goal of being readmitted to the Arab community after the US invasion of 2003 and the election of Shi'a-dominated governments.

A particular problem for Iraqi ambitions has been the attitude of Saudi Arabia. Iraq and Saudi Arabia have long had an important, if complex, relationship. For many years, Iraq was seen as the Arabs’ bulwark against Iranian expansionism and the Saudis actively supported Baghdad, for example, in the Iraq-Iran war of 1980-1988.

The overthrow of Saddam Hussein and the removal of the Sunni-dominated government in 2003 changed the nature of the relationship. Conservative Sunni governments, especially Saudi Arabia, harbour great hostility towards Shi'a Muslims and have refused to be reconciled to the emergence of a government in Iraq in which the Shi'a play such a dominant role.

The collapse of order in Iraq, the resulting rise to regional dominance of Iran and the retreat of the United States from the contest left Saudi Arabia feeling exposed to the Iranian challenge and left Iraq as a place where the Iranian and Saudi rivalries would be played out. Both governments are supporting in various ways different groups in Iraq to promote their interests.

Routinely, this process has taken a Sunni-Shi'a dimension.

There are signs the Saudis might be coming to terms with the inevitable, with reports the Saudi ambassador to Jordan will also act as the non-resident ambassador to Baghdad – a post that has been vacant since 2003.

Rapprochement is, however, limited. The Saudis only reluctantly agreed to the convening of the Arab League summit in Baghdad and their delegation at the summit is likely to be at a relatively low level.

One of the conditions they imposed on their participation has been the exclusion of Syria from the event. Reflecting, in part, pressure from Iran, Iraq has reversed decades of hostility to the regime in Damascus to offer political support for the Al-Assad regime. The Syrians’ absence will be portrayed by the Saudis as a blow against growing Iranian influence in the region.

The domestic dimension
The campaign of violence is heavily influenced by external factors. Perhaps the most important consideration, however, is the challenge the attacks pose to the Iraqi government and to Nuri Al-Maliki’s prime ministership.

At one level, the continuing attacks highlight how the sectarian tensions, exposed and aggravated during the years of American occupation, have not been resolved now that Iraqi control has been restored. The United States left a deeply divided and traumatised society behind when it withdrew.

In particular, the focus of the attacks would indicate that significant elements within the country’s Sunni community have not come to terms with their removal for dominance in the state and their effective sidelining by the Shi'a.

Al-Maliki has gone a long way towards accumulating the key elements of state power in his own hands but, unless he can end the violence, probably by finding a way of accommodating Sunni concerns, his power may prove to be ephemeral and the violence wracking the country will continue.

Anthony Billingsley is a lecturer in UNSW's School of Social Sciences.

This article was first published in the The Conversation.