Opinion Can Rudd reform NSW Labor? And will it save him? 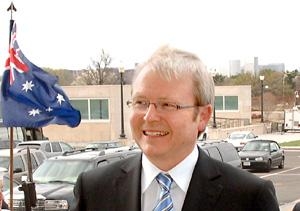 Prime minister Kevin Rudd is seeking to improve his chances of re-election by reforming the troubled New South Wales branch of the Labor Party.

NSW Labor has been embarrassed in recent years by a series of scandals, culminating this year in accusations of corruption by former ministers Eddie Obeid and Ian Macdonald at the Independent Commission Against Corruption.

With many NSW federal seats, particularly in western Sydney, held by very thin margins, the Prime Minister knows he needs to shore up support in Australia’s most populous state if he is to have any hope of retaining government at the upcoming election.

UNSW’s Mark Rolfe, an expert in NSW and federal politics, spoke with The Conversation about why Mr Rudd has decided to take on the NSW branch now, and the possible motivations.

What reforms of the NSW branch should Rudd undertake?

Certainly the idea of these ombudsmen, of judicial or legal training – these are interesting reforms and they haven’t been floated previously in discussions of reforming the NSW branch. My feeling is some of this has been under discussion for a while and Rudd has been part of the conversation for a while because you don’t undertake this sort of reform without having some allies along the way. And I know [the Secretary of the NSW branch] Sam Dastyari has been a strong proponent for reforming the grassroots of the party, particularly through primaries. Now this idea was not mentioned by Rudd today although he did say at the end of the press conference he wanted to keep talking about party reform at some future date.

This is when we will get some idea of the primaries at the grassroots of the party to allow members and non-members to participate in the selection of Labor candidates for state and federal parliaments. This has been trialled – it needs rolling out – but in combination with the use of online organisation and communication. The extension of the party’s reach through online means was highlighted in the Bracks, Carr and Faulkner report.

The report also discussed reaching out to progressive organisations outside the Labor party, in effect to get them associating and mobilising with the Labor party. These are the areas that will be touched on in the future, especially by Rudd. He will want to be seen as driving this, to show that he’s cleaning up the party and to show that he is not beholden to factions and “faceless men” and all the other clichés that get bandied about, particularly by Abbott. Of course Rudd wants to remove one of those weapons that Abbott has been using: the complaints about the unstable ALP with its ructions and so-called faceless men.

Why has Kevin Rudd taken control of the NSW branch of the ALP?

Kevin Rudd wants to get re-elected as prime minister sometime later this year. Therefore he needs to paradoxically distance himself from the stench associated with the NSW branch of the party, but at the same time, elevate the party’s chances in the forthcoming election.

He needs to improve the position of the Labor Party around the country and NSW is obviously an important state because of the number of federal seats here. The party has suffered in NSW, at the federal and at state level in the last several years, because of the perceptions of corruption and back scratching that goes on.

Kevin Rudd is not a favoured son of NSW, and in fact he has had enemies here, as we have seen in the past with his deposition in 2010. But he is in this position of wanting to be seen to the voters as doing something about the party, but also as helping the party improve its chances at the forthcoming election.

Is the NSW branch 'fixable'?

It has to be. But there’s a paradox about this. In the last 50 odd years of party history in this state, and Labor history generally, we’ve seen increasing centralisation and a move away from the grassroots democracy that started the party back in the 1890s. And in many ways the events in the last decade in NSW, federally and in other states is the consequence of the centralisation of the party that has happened with interventions in states.

Paradoxically again, it is this top-down, this centralised intervention that may in fact help revive the party at its roots if it is carried out properly – if it is not impeded by some of the union and faction leaders within the state.

Rudd has done this with the blessing of Sam Dastyari, the Secretary of the NSW branch and the blessing of John Robertson, opposition leader, and I’m sure with the blessing of certain other upper echelons of NSW Labor. The party has declined and calcified at the roots and this is known widely so it needs to be revived at the roots. But the unusual thing, of course, is that it can only be done at the intervention at the top to try and encourage that grassroots growth, to somehow intervene but pull back future top-down structures.

Is this an attempt by Rudd to squash the factions that knifed him once before?

I don’t know about completely squashing factions. Certainly messing them up a bit. It won’t be squashing them because some of these now personality-based groupings are always going to happen. Gone are the old ideologically-based factions. There is still the problem of union and party leaders in the party being in their powers and being potential obstructions to Rudd. So it is more a case of messing around with current factions in some other way with the reforms.

The important thing to say about Rudd is he has not been a good factional man, so to speak. He rose to power on both occasions over the heads of many of the party leaders by appealing to the public and sections of the media to publicise his cause. He has not been a traditional factional warrior climbing through the factional ranks. In this respect his public appeal today bolsters that image as separate from the “faceless men” and ironically it’s that semi-outsider status that allows him to attempt to reform the party with the allies that were mentioned before.

This interview first appeared on The Conversation

All in the game: the weird world of Craig Thomson