It's possible that foreign aid might do a better job at buying influence and deterring aggression than spending $12 billion on new jet fighters, writes Adam Lockyer. 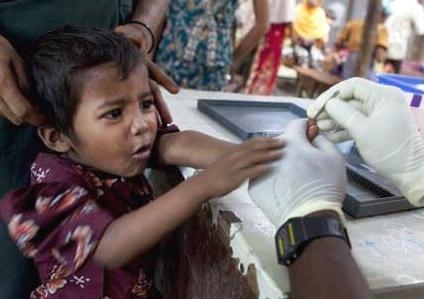 OPINION: The primary purpose of foreign aid is to buy political influence. Only second is foreign aid intended to reduce poverty and make life better for less fortunate people. It is a bonus if foreign aid is able to teach a young Timorese girl to read, inoculate a Papuan boy against tropical disease or provide an elderly Kiribati grandmother with clean drinking water.

This hierarchy of foreign aid is not righteous, virtuous or good. Indeed, in an ideal world, foreign aid would be completely altruistic. Nonetheless, donor states have generally viewed foreign aid through the narrow prism of their own national interest.

It appeared at first that the Abbott government grasped this reality. Its rationale for rolling AusAid into the Department of Foreign Affairs and Trade was to better align "the aid and diplomatic arms of Australia's international policy agenda". In other words, the amalgamation was meant to make foreign aid work more directly and efficiently in the national interest.

It now seems, however, that the Abbott government does not see the value and purpose of foreign aid. Foreign aid was one of the biggest losers in the budget. The cut of $7.6 billion over five years was one figure that immediately jumped off the page.

Professor Stephen Howes of the ANU has calculated that it will mean a 10 per cent reduction in foreign aid between Labor's 2012-2013 budget and the 2015-2016 fiscal year.

The budget cut in foreign aid is reductionist thinking at its worst. It fails to see the big picture. If Australia signals to its immediate region that it is no longer in the donor game, these countries will go knocking on other doors.

Recently, Charles Wolf Jr from RAND published a report showing that China has dramatically increased its foreign aid over the past decade. In 2001, China spent roughly $1.7 billion on foreign aid. By 2011, the figure had claimed to $189.3 billion.

China's aid has increased with a purpose. China has directed its growing foreign aid machinery towards those regions that can best feed its resource hungry economy. And whereas Australia and most other countries provide aid in the form of grants, Chinese aid mostly arrives in the form of loans, which is earmarked to develop the recipient's natural resources and infrastructure.

True to form, it seems that Chinese foreign aid has primarily been focused on growing its economy rather than competing for international political influence.

There are questions, however, about how long this will continue. Strategic competition has been steadily escalating in East Asia. The emerging great powers of Asia are already beginning to rub against each other. In the 19th and early 20th centuries, the European great powers found an outlet for their political and economic rivalry in the form of colonisation.

Likewise, the superpowers during the Cold War vied for influence in far-flung nations. In most cases, there was a price tag attached to siding with one side or the other. It was primarily through foreign aid that the superpowers purchased nominal allegiance from African and Asian countries.

Australia is incredibly fortunate. Its proximity to Asia means that it can cash in on the Asian Century, while being far enough away to be secure. The worst possible outcome for Australia is that East Asia's budding strategic competition finds an outlet in our immediate neighbourhood.

If countries in our area of direct strategic concern cannot get foreign aid from Australia, why would they not reach out to China, Japan or others? Australia would be propelled from being on the periphery to being on the front line.

From a strategic perspective, it's possible that foreign aid might do a better job at buying influence and block the entrance of interlopers than spending $12 billion on new fighters.

Dr Adam Lockyer is a Research Fellow in Defence Studies at UNSW.

This opinion piece was first published in the Brisbane Times.