The transformative power of dance and theatre will be central to a new global campaign targeting gender violence, playwright and activist, Eve Ensler announced at UNSW’s annual human rights lecture. 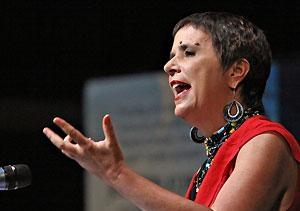 The creator of the award-winning The Vagina Monologues unveiled the plans when she delivered UNSW’s annual Australian Human Rights Centre (AHRCentre) lecture to a packed audience at the Sydney Theatre.

Ensler established V-Day, a global movement to end all forms of violence against women and girls, which is celebrated annually on Valentines Day.

“Next year on V-Day, we are asking one billion men and women to rise , to strike, to walk out of their jobs, their homes, their schools and dance until the violence stops,” she said. “One Billion Rising will be the moment when women come to see their strength in size and solidarity, and where men stand by us.”

The lecture, Until the Violence Stops, explored theatre as a mechanism for giving visibility to human rights violations, focusing on her work with women and girls in conflict situations.

“I have witnessed theatre change consciousness, bring about revelation, catharsis and activate people to become change makers in their communities,” she said.

Arriving in Australia directly from the Democratic Republic of Congo where she has established the City of Joy, a special facility for survivors of sexual violence, Ensler told the audience how Congolese women have learnt to heal through telling their stories.

“At the first City of Joy graduation I watched 41 women who had been raped by gangs or had members of their families killed, or had bullet wounds to their heads, strut across a stage and demand an end to impunity, rape, corruption and exploitation.”

Ensler believes the power of theatre is enough to transform suffering in the world and that  performance is not just an indulgence in the midst of global poverty and genocide.

Introducing Ms Ensler at the Sydney Theatre, Director of the AHRCentre, Associate Professor, Andrea Durbach, said: “Through her writing and performance, Eve Ensler has squarely placed one of the greatest crimes against humanity firmly on the world stage. And not from a distance.

“She has carried her practice of theatre-making into the field – in Afghanistan, Mexico, Haiti, India, Egypt, South Africa, Jordan, and the Democratic Republic of the Congo - educating millions of people about a crisis within our world, about horrific and endemic violence against women and girls. Eve has exposed this madness from within the theatres of war, via her theatre of humanity.”

Ensler was invited to speak on the eve of a major UNSW international conference, Justice for All? The International Criminal Court – a Ten Year Review. The conference will mark the work of the Court in its first decade, in particular, its role in achieving gender justice.

The conference and lecture are initiatives of the ARHCentre, UNSW’s Faculty of Law and Faculty of Arts and Social Sciences. The lecture was presented in conjunction with the STC.

For a podcast of Until the Violence Stops click here.