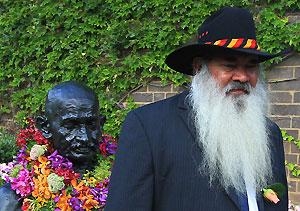 Professor Dodson delivered the inaugural Gandhi Oration to a capacity audience of Australian and Indian dignitaries on the anniversary of Mahatma Gandhi’s assassination.

He said there were parallels between Gandhi wanting to get the “Empire out of India” and the desire to displace the intrusive authoritative position of the public service and government from the lives of  aboriginal people.

Professor Dodson’s comments come less than a week after the Tent Embassy security scare involving the prime minister, which some commentators believe jeopardised the success of the referendum.

Professor Dodson said it would be simplistic to condemn the behaviour of the protestors without considering the sense of oppression Indigenous Australians feel towards the government on a range of matters.

“I will always condemn bad manners and unnecessarily aggressive behaviour. But I will always defend people’s rights to assert their political position and try to look to the heart of why people feel so oppressed that they feel violent confrontation is the only recourse to the resolution of their position.”

Professor Dodson, co-chair of the Expert Panel for Constitutional Recognition for Indigenous Australians, defended the Panel’s recommendation for a non-discrimination provision.

He said public criticism of the provision made him empathise with Gandhi, who left the second Anglo-Indian round table in 1931 disheartened by the tone and direction of the negotiations.

“I hope, however, that we as a nation can have an informed and mature conversation about such matters, without resorting to divisive commentary or cheap political point scoring,” Professor Dodson said.

“I believe that racial discrimination should not be tolerated in our society, and enshrining this in our constitution would be an act that enhances us all.”

Professor Dodson said his understanding of Gandhi’s teaching was that assimilation was not about conformity.

“Unity has to be about accommodating difference through dialogue so that common ground can be found.

Professor Dodson was chosen to deliver the inaugural lecture in recognition of his leadership in promoting reconciliation between Indigenous and non-Indigenous Australians. He is a former Royal Commissioner into Aboriginal Deaths in Custody, former Chair of the Council for Aboriginal Reconciliation and recipient of the Sydney International Peace prize.

He is founding Director of the Indigenous Policy and Dialogue Unit at UNSW.

The Gandhi Oration was established by UNSW and the Australia India Institute.