In a city brought to its knees by austerity, filmmaker Mary Zournazi describes an unlikely wellspring of dignity and hope. 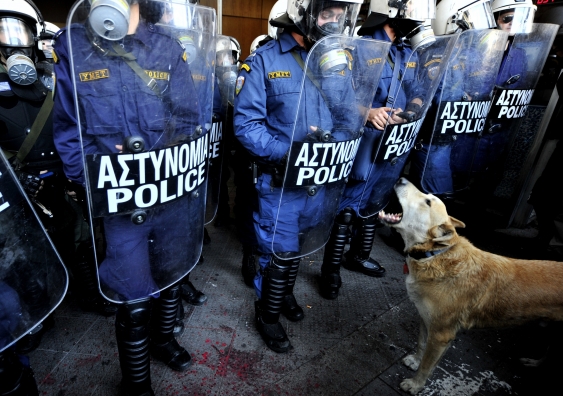 Loukanikos, which means sausage in Greek, barks in front of riot police in central Athens in 2010. Photo: Aris Messinis/AFP/Getty Images

Two things are certain in Athens: austerity and dogs. The former is inevitable; the latter a strange yet potent motif of dignity and humanity, according to acclaimed UNSW filmmaker Mary Zournazi.

Well-fed and watered, the strays occupy every corner of Syntagma Square, the epicentre of civic and political life in Greece, a nation hobbled by debt and successive eurozone bail-outs that have triggered waves of unrest.

When she visited in October 2014 on a holiday to explore her Greek heritage, Zournazi remembers the tension was palpable, with “people who had lost their jobs overnight begging on the streets”.

A paradox then, she thought, to see so many stray animals in such good health.
Who cared for them in such lean times, and why?

“In a way, the dogs represent the vulnerability of Greece and what the [people] are going through, the dogs are the most vulnerable in the community and people can identify with them,” says Zournazi.

The dogs represent the vulnerability of Greece and what the people are going through.

The strays have been a constant in the austerity struggle, marching alongside tens of thousands of protesting Greeks in 2011.

The most famous, Loukanikos, first started attending political rallies as a puppy back in 2006 and became an emblem of the popular revolt after squaring off with riot police in front of the world’s press. Loukanikos was even nominated as Time magazine’s 2011 Person of the Year.

That 2014 visit inspired Zournazi’s documentary, Dogs of Democracy, about the dogs and the people who take care of them. 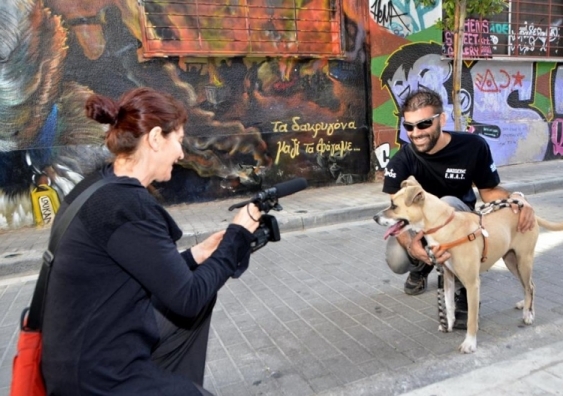 Loukanikos is one of the “characters” in the film. A preview can be seen on YouTube and a radio version, together with an essay, was broadcast by ABC Radio National in October.

“[The documentary] became a search for how a stray dog can become so powerful in people’s psyche and the meaning of that,” she says.

“As a mirror of Greece’s place in Europe as the most vulnerable, the dogs can tell us something about what needs to be done in this situation, and the power of peaceful resistance amid the rise of neo-Nazism and the temptation for violence.”

Above all, Zournazi says the unique bond between the people of Athens and its street dogs is a demonstration of hope and community, with lessons about love, loyalty, commitment and care – it can tell us something about our “common humanity” in difficult times.

“There is something so incredible about these dogs and the people who care for them,” says Zournazi. “It is a story that was begging
to be told.”