Opinion Eisenstein in Guanajuato half pulsates with sexual vitality 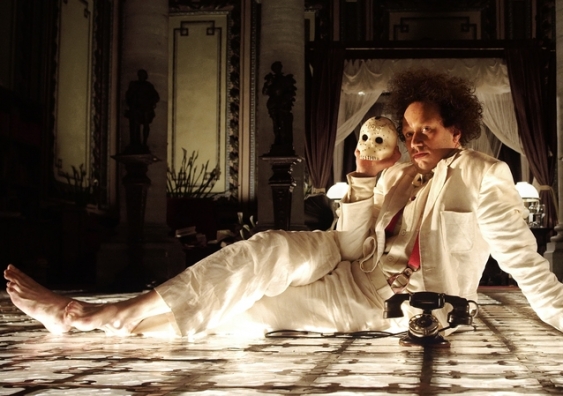 That trip came on the heels of Eisenstein’s four major films from the 1920s: Strike (1925), The Battleship Potemkin (1925), October (1928), and The General Line (1929). Those four films constitute what Eisenstein would refer to as an “ideological victory in the field of form,” a successful repurposing of cinema to serve in the utopian project of state socialism.

To that end, the films made good on the director’s theories and pioneering use of montage. By adapting early Hollywood narrative, Eisenstein inaugurated a new syntax of the moving image that could bypass issues such as mass illiteracy and regional dialects in speaking directly to his intended audience.

Narratively, Greenaway’s film covers the final days Eisenstein spent in the North-Central state of Guanajuato, focusing not on his abortive work, ¡Que viva México!, but on a frequently unrecognised affair between the director (played gloriously by the Finish actor Elmer Bäck) and his local guide, Jorge Palomino y Cañedo (Luis Alberti).

As the voiceover notes:

While the English subtitle of October was Ten Days that Shook the World, the director’s time south of the border concluded with “ten days that shook Eisenstein".

In Greenaway’s view of things, it was a very specific personal event that impacted the aesthetic: namely, when Eisenstein fell in love with another man; or, in Greenaway’s vision, when he first allowed himself to be sodomised.

What all of this could mean in “the field of form” is that we should expect, from Greenaway if not from Eisenstein, a shift in emphasis away from collective class identities and onto discrete sexual couplings, a replacing of Karl Marx by Sigmund Freud, and a zooming in from the politicised multiple to the psychologised one: in short, we should expect an aesthetic that is more akin to Hollywood romance than to Soviet dialectics.

Eisenstein in Guanajuato, in its very structure, parallels this perceived transformation in the Soviet director’s aesthetic.

The first half of the film sets out to dazzle by channelling Eisenstein’s own affection for experimental shot types and ostentatious edits. Cameras dolly and pan and track and arc vertiginously; single shots are split three ways into triptych panels; telescopic lensing warps backgrounds; evidential scraps and greyscale photographs are intercut with a garishly oversaturated diegesis.

All of this, combined with Bäck’s delirious performance, makes for a film that pulsates with sexual vitality while alluding to an unseen historical panorama. Or, at least, that’s what it does for the first half.

Mexico is saturated in colour and full of movement. Submarine

The second half, by contrast, is weepily sentimental: a holiday romance.

Indeed, the scene itself forges a spectacularly literary connection between history and desire, with Eisenstein and Palomino nervously discussing politics during coitus. “And you tell me all these things,” asks the director, “as your prick is in my ass?”

This pivotal moment is narratively redolent of Bernardo Bertolucci’s Last Tango in Paris(1972), only replacing the stick of butter as a sexual lubricant with a few drops of olive oil. The comparison is apt both to the scene’s apparent violence and to the film’s production.

Bertolucci famously considered Marlon Brando as a physical extension of his own manhood, and there are echoes of that in Greenaway’s decision to cast Bäck in the title role.

According to Greenaway, quoted earlier this year in The Independent, Bäck was a man who:

would temporarily give me his heart, soul, brain, body and prick in the services of the depiction of a very human, very emotionally and anatomically naked – vomiting, shitting, weeping, fucking, sweating, howling Eisenstein.”

Visually, the opulent interiors of this and other scenes are akin to the Ancient Rome of the dementedly smutty Caligula (1979). It seems that Greenaway intended this likeness.

The film’s multiple renditions of Sergei Prokofiev’s Dance of the Knights, once used as Caligula’s title music, shore up the comparison. The score also contributes a grim overtone of tragic fate with which to haunt sexual liberty.

Eisenstein never shied away from sexual vitality, both in his films and in life. Here we might recall the famous creamer scene from The General Line, in which ejaculatory streams of milk are presented as a machine-age money shot.

Or, biographically, we are punctually reminded of the photograph sent from Eisenstein to a friend in 1931, in which he sits astride an enormously phallic cactus. His inscription: “Speaks for itself and makes people jealous!”

Irreducibly crude expressions such as these inform the exuberant sexuality of the film’s first half, exemplified when a series of shot reverse-shots allow the director to converse with his own penis on matters of sexual sublimation. “Signor prick,” he tells it, “behave!”

Eisenstein was gleefully sexual, but never openly sentimental, or at least not in the way Greenaway wants him to be. Where this film ultimately disappoints is in its misprision of Eisenstein for a cliché story of the genius-in-love-versus-authority.

Of course, such a story makes perfect sense today, not least in the context of Russia’s opposition to this film.

“Putin has created this homophobia,” insists Greenaway, but one nevertheless fears that the final presentation of the socialist state as a blockage to homosexual desire might nevertheless serve as anti-utopian propaganda.

Eisenstein in Guanajuato was shown last night as part of the 2015 Sydney Film Festival, and will show again this weekend. Details here.

Mark Steven is a Research Fellow at the Centre for Modernism Studies in Australia UNSW.