If Labor is to last longer in government next time around, it needs to better define not only itself but its opponent, writes Mark Rolfe. 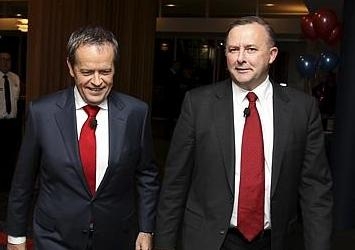 Winning votes...Labor doesn’t know what to do about this rhetorical technique called definition.

OPINION: Just when you thought it was safe to forget an otherwise forgettable election, there is one person who won’t let you. Tony Abbott wants to remind you in order to continue defining both the election and Labor. He wants to shape the political battlefield in the months ahead. And Labor don’t know what to do about this rhetorical technique called definition.

Bill Shorten and Anthony Albanese are currently touring the country, wooing Labor members with their policy ideas of science, a diverse economy, infrastructure and the like in order to win party leadership.

Of course, Labor is in opposition and will need to oppose Abbott. However, Labor don’t know how to convincingly do this. In government, it relied too much on painting him as a nasty man without connecting that to larger political themes through the power of definition.

To explain, definition is vitally important in argument and we do it all the time in general and in politics.

For example, we are in the middle of a debate about same sex marriage and each side chooses a definition to advance their cause. And notice how the definitions are “loaded”, so to speak, to reflect how they value their choice. People cannot help injecting their approvals or disapprovals into definitions. This is inevitable in politics in particular and in arguments in general.

Those against the proposal define it as between a man and a woman, thus hoping to cut off any further development. Those in favour of the proposal attempt to open it up by defining marriage as between two people who love each other. These opposing stands are not simply based on facts which are somehow reconcilable but on values which are incommensurable.

Definitions are the launch-pads for making our persuasive cases to others. A popular definition is “Labor is the party of big government”, which is meant to skew things to why we should consider Labor bad for the economy.

To advance a definition is to plead a cause, to advance a claim, and this is where leadership comes in.

One of the prime skills of a political leader is the capacity to define people and situations and so shape the context in which opponents, events and proposals are viewed by the public. A successful leader thus shapes perceptions of opponents and of the political landscape they contest.

So, in place of detailed policies, Abbott deployed the old narrative of populism over three years. I’m of the view that populism is an indelible part of democracy, not its dangerous aberration.

Since the 19th century there has been a view amongst many in the Anglosphere that paints politicians as lying scumbags who are part of an establishment, screwing “the people”. With this anti-politics politics goes the tendency of people generally to attack government, especially when it helps constituencies they don’t like, but also want government for their own causes, to get more services while paying less tax.

Abbott played this old rhetoric and, for example, successfully redefined as “lies”Gillard’s stand on a carbon price in 2010 and redefined that carbon price as a “tax”. These redefinitions played into the Gillard’s government’s eventually fatal credibility problem.

It is by this measure of definition that Rudd proved deficient in the campaign, which is surprising given his success in defining Howard in 2007. Then, he asserted the election was a referendum on WorkChoices, which proved persuasive with many. Similarly, Howard asserted in 2004 that the election was about trust, which proved successful in light of then-opposition leader Mark Latham’s credibility problem.

Labor tried for months – if not years – to force the Coalition to release costings and other facts. Obviously they weren’t going to do it. The opportunity was there to insert into the rhetorical vacuum left by Abbott Labor’s own definitions, its own loaded terms, but they failed to do so.

When Joe Hockey complained about Labor “maxing out” the government credit card, Labor should have said “the international credit agencies said we have a platinum credit card with their triple-A ratings".

When Hockey said the government should live within its means like any household, Labor should have said:

When Abbott promised reduced taxes and more services, Labor should have redefined this promise as smaller government AND more services and followed that up with: “can you have your cake and eat it as well?”

Also, they should have injected “outsourcing” and “privatisation” into the void as options for Abbott to square the circle.

Labor talks technical economic language without connecting it to politics and to what people understand and value. It needs to better define not only itself but also its opponent. And to do so it needs to consider other elements of the populist heritage which once informed Labor history, if it is to last longer in government next time around.

Whenever that may be.

Dr Mark Rolfe is a Lecturer in the School of Social Sciences, UNSW.