Former President of Ireland Mary McAleese has given a UNSW audience insight into peace-building in Northern Ireland and the “hermetic seals” that separate people and religions. 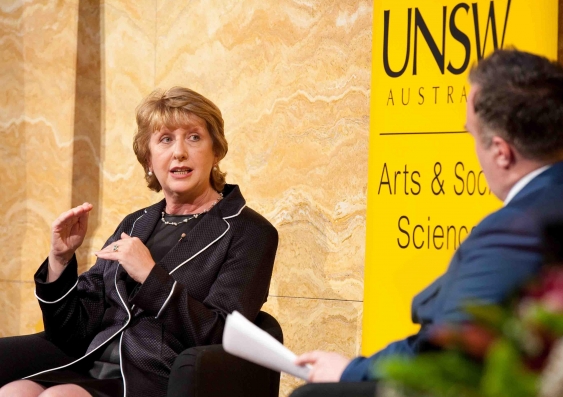 In a wide-ranging conversation covering sectarianism, peace-building, acceptance, literature, Irish poetry and even the BBC sitcom Mrs Brown’s Boys, the former President of Ireland, Mary McAleese has treated a UNSW audience to an evening of intellectual conversation and irreverent humour.

Dr McAleese was speaking at the University more than a decade after she stood in Sydney’s Opera House to announce the campaign to establish a Chair in Irish Studies at UNSW.

As a result of that announcement, Professor Rónán McDonald was appointed as the inaugural Australian Ireland Fund Chair in Modern Irish Studies at UNSW.

Introducing the former President to the capacity audience at the UNSW Global Irish Studies Centre event, Professor McDonald described the evening as “a momentous night charged with significance and history”.

Elected Head of State of the Republic of Ireland in 1997, Dr McAleese was re-elected unopposed in 2004.

Discussing her time in office, which spanned some of the most extraordinary events in Anglo-Irish history, the self-described “bog-standard Irish Nationalist” said the 1998 Good Friday Agreement marked the most significant milestone in both her career and the Northern Ireland peace process.

“Finally, we had the chance to get the relationship between Britain and the North and South of Ireland right,” she said. “For the first time, Ireland had the opportunity to change its narrative.”

As a Catholic growing up in Belfast during the decades of unrest in Northern Ireland, Dr McAleese experienced the generational impact of violence and hatred.

“My aim as President was to try and break down the hermetic seals that had separated people and religions,” she said. “The biggest arrears in Ireland at the time were mutual mistrust and distrust.”

Her determined focus on peace-building won her acclaim and respect from all sections of Irish society.

When asked by Professor McDonald what lessons the Irish peace-process holds for the rest of the world, Dr McAleese said: “People need to be deeply embedded in a situation to really understand it – for instance we can’t relate Northern Ireland to Iraq. But we need to learn not to reach for the gun, the bullet, the push or the shove, but to begin with a sophisticated range of responses to difficult situations.”

A barrister and former professor of law at both Queen’s University Belfast and Trinity College Dublin, Dr McAleese pursued a doctorate in Canon Law at the Gregorian University in Rome after her period in office and was recently a visiting scholar in Irish Studies at Boston College in the United States.

Discussing the importance of scholarship, Dr McAleese said education is an “essential tool in this world of ours” stating it has the ability to “push envelopes, question givens, and take us out of the spaces we live in”.

“Scholarship that is open and courageous is what universities introduce us to,” she said.